Atlantis started out as the North Bay Bathing Pool, an outdoor swimming pool that originally opened in July 1938, only minutes away from the North Bay in Scarborough.

Above: The original North Bay Bathing Pool (from the author’s personal collection)

In 1984 the site was redeveloped and rebranded as Waterscene, and a £500,000 investment gave the pool the (then) longest water chute in the world. Like nearby Marvel’s, which also opened in 1984, the new development was pioneered by businessman Don Robinson, director of Kunick. 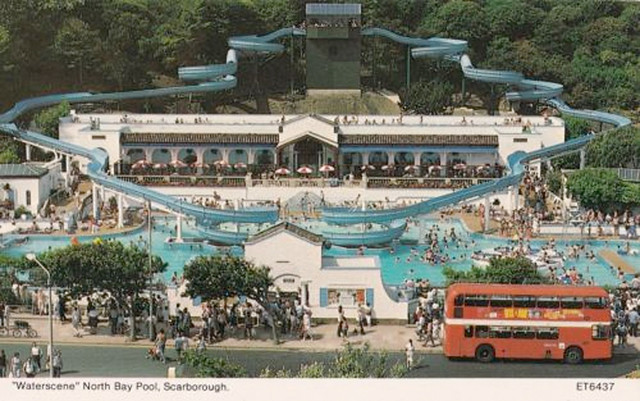 The opening was reputedly a grand affair, with Fred Pontin (of Pontins Holiday Camps fame) unveiling a plaque. The pool was apparently the first large scale waterpark in Europe.

In 1987 the site was sold to Kirkpool Ltd, headed by Tommy Hanson. The name changed to Water Splash World before being resold to Edencorpleisure in the following year. The lease was then bought by Scarborough Council in 1992. The site didn’t became known as Atlantis until 1995.

Atlantis, like Water Splash World, was arguably more of a rebranding of the original Waterscene attraction.

Unfortunately my only encounter with Atlantis (and its predecessor Water Splash World) came from the outside. We used to pass it on the way to Peasholme Park, Manor Gardens and Kinderland, and I remember how blue it always looked. I was jealous of the children who got to ride the long winding slides and splash around in the outdoor pool. Even though I never went inside, I’m still curious to know about what it was like, and it remains a vivid part of my Scarborough memories.

The reputation of Atlantis was severely undermined by the death of a swimmer in 2001, and following years of financial difficulties, closed in 2007. The site was later redeveloped into the Military Adventure Park, which continues to operate today.

This blog post is only a short introduction to Atlantis and its history, based on limited sources – more details will be added as the research progresses.

Below are some further sources:

28 Days Later features images of Atlantis and its demolition.
Scarborough Hotel and Tourist Information Blog has a short article about the site.
This video shows Atlantis during its heyday, and this video features the original bathing pool (1950s).
Various articles about the site and its predecessors are available online from Scarborough News.

28 thoughts on “The Blue Waters of Atlantis”