Scarborough’s Hispaniola is perhaps the best documented of the attractions selected for this archive.

Unlike Kinderland, Marvel’s, Atlantis and Millennium, this attraction has enjoyed a long and consistent life, with the Hispaniola making pirate-themed trips across Scarborough Mere for nearly half a century. Sadly these voyages ceased several decades ago, although the boat still carries passengers along the South Bay during high season.

Above: The Hispaniola on the Mere (from the author’s collection)

Sailing from the mainland in a replica galleon (named after Stevenson’s fictional vessel in the story), children and their families were greeted by staff dressed as pirates, and escorted to ‘Treasure Island’, where imitation gold coins had been cunningly concealed in the sandy soil. Using wooden branches and sticks, youngsters were encouraged to find the ‘treasure’. Success was rewarded with a certificate, and failure with a dreaded black stamp.

I remember frantically swiping at the soil with a tree branch, anxious to find a doubloon before my two brothers did. The ‘pirates’ were very convincing – both fearsome and funny! I don’t remember a black stamp when I visited (perhaps that was an earlier feature?) although vaguely recall the small certificate. Riding the boat was exciting – like being a real pirate. Or so I thought. At the time…

The Hispaniola first graced the waters of Scarborough Mere in 1949, and on only it’s second ever voyage, on June 18, 1949, it ran aground, becoming trapped in mud only metres from ‘Treasure Island’. Passengers included the Mayor and Mayoress, local dignitaries and 10 children. According to the Scarborough News, the Mayor saw the lighter side of the unfortunate situation:

There is no truth in the suggestion that Long John Silver’s charts were faulty.

Doubloons all bore the image of the Hispaniola. Initially made from metal, they were later replaced with plastic versions. However, in spite of small changes to the Treasure Island trips, the attraction managed to survive virtually unchanged for multiple decades, often enjoyed by several generations of the same family. 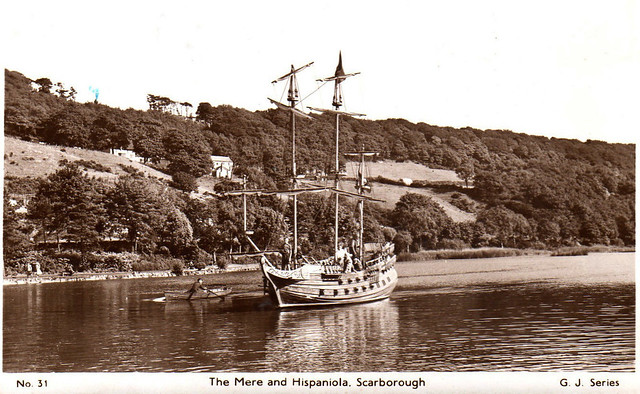 Above: The Hispaniola (source)

During the twentieth century, Scarborough Mere was a popular park with a cafe, rowing boats and canoes. Water sports still take place there today, and the shores are frequently lined with fishing enthusiasts. However, today’s Mere is an altogether quieter place without its boats, scores of excited children, and, of course, pirates. 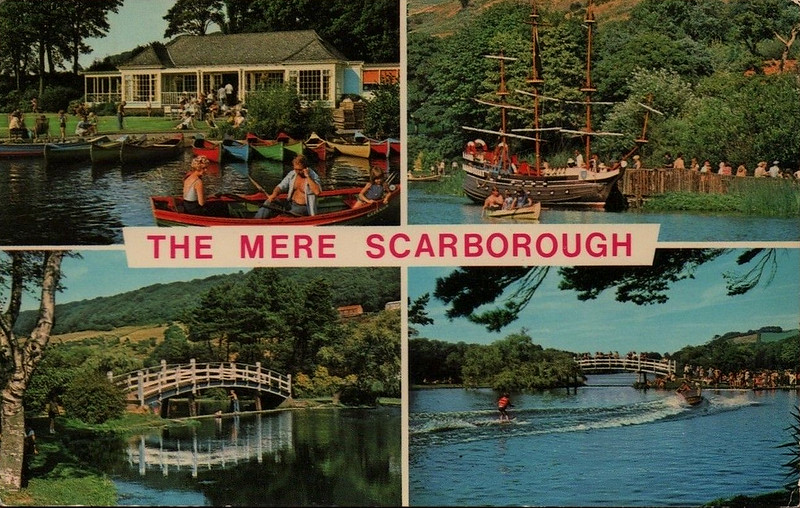 Above: Old postcard depicting boats on the Mere (source)

From 1993 the Hispaniola stopped sailing on the Mere, to the uproar of former passengers; young and old. A number of reasons were given for ending this popular council-run tradition – loss of money, unfavourable sailing conditions (due to an excess of weeds and silt on the bed of the Mere) and the boat’s engine problems. Others suggested that the closure was part of longer term proposals to redevelop the area as a country park, with a focus upon nature, fishing and quieter endeavors.

As for the Hispaniola, after spending a long period beached near the North Bay Bathing Pool, she eventually sailed again, making trips for tourists along the South Bay.

Above: The Hispaniola, moored at Scarborough Harbour (source)

As with the brief histories of the other attractions compiled here, this account is based on limited sources – mainly Scarborough News and memories posted on obscure forums.

33 thoughts on “Voyage of the Hispaniola”