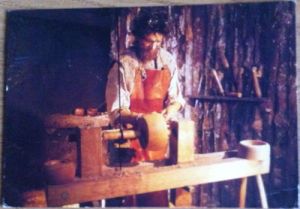 Above: A waxwork Viking making tools at the Millennium Museum (source)

Below: A similar exhibit at the Jorvik Museum (source)

The museum’s waxworks and wooden scenery included a Viking house, complete with a family of inhabitants, illustrating the alleged founding of a settlement in Scarborough by the Viking raider Skarthi.

Skarthi, otherwise known as Thorgills Ogmundarson, is said to have given the town it’s early name – Skarthaburg, from which modern-day equivalent Scarborough is derived. More recently alternative claims have indicated Anglo-Saxon origins, with the town’s name referring to ‘the hill with the fort’.

Above: The Viking connection even inspired Scarborough rides, such as the one above from 1987 (source)

Indeed, in spite of the popular belief that Scarborough was founded by Vikings – there is little firm evidence to support this claim. Certainly there seems to have been various early settlements in the area, dating back to the Bronze and Stone Ages – and a Roman signal station in the fourth century.

Above: Details of another Roman signal station in nearby Filey (source)

Although Scarborough’s pre-Middle Ages colonisation is unclear, parts of North and East Yorkshire certainly received visits from Viking raiders. As already mentioned, York has created a popular museum inspired by early Scandinavian invaders, whilst Hull had a speedway team named after them.

Likewise, Scarborough RUFC has also adopted ‘the Vikings’ as its moniker. Certainly, the idea of a Viking Scarborough is an appealing one, not least given the glamorisation of Vikings by popular culture and legend. They are often depicted as fierce, savage warriors, complete with horned helmets, long blonde locks and primitive weapons – popular inspiration for fancy dress costumes and films.

Above: Viking stereotypes in an Asterix cartoon feature film (source)

Historical sources unsurprisingly paint a more complex picture – for instance weaponry was much more sophisticated than the crude hammers and axes brandished by cartoon characters and Hollywood actors in traditional epics.

Above: The Vikings (1958 film) – plenty of fighting and basic weapons (source)

Nor did all Viking warriors have blonde hair – whilst this is thought to have been the ideal (some bleached their hair), their exploits across various regions (including establishing settlements as far away as North Africa and Russia) resulted in a diverse population. Indeed, the term Viking itself refers to one participating in a seafaring expedition, rather than denoting a specific geographical region of origin.

Above: A Viking sailing vessel at the Viking Ship Museum in Oslo, Norway (source)

Given this propensity for travel, it is of course plausible that Vikings may have at one time passed through or even settled in Scarborough. It is also plausible that these claims are exaggerated – tourism websites proudly profess this Viking heritage without the backing of substantial evidence. Indeed, it is thought that the link was originally made back in the 1960s – a reference to an 1000 year old Icelandic/Viking Saga.

Above: Section from an Icelandic Saga – these prose histories described events in the tenth and eleventh centuries and earlier (source)

Regardless of who settled in Scarborough first, and when, the Millennium Museum no longer offers any argument either way. The exhibits, which also included King Edward I’s castle (complete with loo and smell machine!) were sold and the attraction closed down in 2001.

Above: The real Scarborough Castle – once owned by King Edward I, who held court there on several occasions (source)

History itself is never completely objective –  tourist organisations and businesses in particular have strong investments in popular myths and legends.  After all, these stories bring people (and their money) to places such as Scarborough. Stories From Scarborough aims to explore some of these tales – not necessarily to separate the fact from the fiction, but to demonstrate that myths, legends and misconceptions are just as much a part of history as archaeological finds and official documents.

Do you have anything to add about the origins of Scarborough? Is the Viking story a myth? Did you ever visit the Viking House in the Millennium Museum? Share your thoughts below.

3 thoughts on “A Viking House at the Millennium Museum: Fact or Fiction?”