Swimming has, unsurprisingly, proved to be a popular theme here at Stories From Scarborough. From the epic sprawling slides of Atlantis to the glamour of the South Bay Pool in the 1920s, water sports of various kinds have long been a part of Scarborough’s enduring appeal.

Above: Even surfers come flocking to Scarborough (source)

Whilst pictures of the North and South Bay bathing pools (and of course the sea!) are plentiful, those of Scarborough Aquarium (later to become Gala Land) are harder to come by. Not initially known as a swimming venue, the aquarium’s early appeal (following its 1877 construction) came from its collection of sea life.

However, one bold swimmer changed this.

Captain Matthew Webb was a famed swimmer – his list of achievements includes being the first to swim the English channel without artificial aids – a feat that took him 21 hours and 45 minutes.

Never shall I forget when the men in the mailboat struck up the tune of Rule Britannia, which they sang, or rather shouted, in a hoarse roar. I felt a gulping sensation in my throat as the old tune, which I had heard in all parts of the world, once more struck my ears under circumstances so extra-ordinary. I felt now I should do it, and I did it.

Never one to shy away from a challenge, Matthew Webb was born in 1848; son of a surgeon and eldest of seven children. He grew up in Shropshire and learned to swim in the River Severn.

Above: The River Severn is the longest river in the UK (source)

At the age of twelve he embarked on a seafaring career, and at fifteen he saved his younger brother from drowning in the Severn- the river where his love affair with swimming began.

Above: The rescue took place near Ironbridge, Shropshire (source)

Years later Captain Webb added further exploits to his growing reputation – he dived under his ship in the Suez canal and also receiving a medal for attempting to rescue a fellow crew member who fell overboard near Russia. In a bid to further his swimming career, he abandoned life at sea for training at Lambeth Baths. Webb had heard about a failed attempt to swim the channel, and was determined to have a go.

Above: Lambeth Baths – specially designed pools and bathing houses started to replace so-called ‘wild swimming’ for many during the late 1800s (source)

Following his successful channel swim, Matthew Webb was highly sought after and competed in numerous challenges both at home and abroad – usually for a significant fee. As part of his whistle-stop tour he allegedly spent 74 hours in the Scarborough Aquarium, in August, 1880. With only a four minute break he swam virtually non-stop for the entire duration – an incredible feat which must have been exhausting to watch, let alone swim!

An 1880 print by John Jellicoe depicts a similar feat (60 hours) at Westminister Aquarium – click here to see it.

There are some minor disagreements as to the exact nature of this water marathon – some sources say he swam, others say he was treading water. Even the length of time has been debated, for instance the San Francisco Mail and other publications argued (or perhaps misreported) that the swim lasted 60 hours. 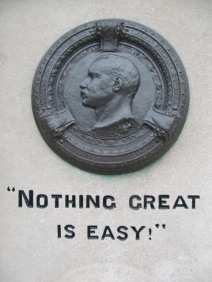 Above: An apt motto for a memorial in Webb’s birthplace – Dawley in Shropshire (source)

Only three years after the struggling aquarium opened, one can only presume that Webb’s presence was designed to attract much-needed visitors; a ploy which ultimately failed in the long term – the aquarium was sold only years later due to low visitor numbers.

Captain Webb’s pursuit of danger, fame and fortune sadly led to a premature death. Aged just 35 years old, an afternoon swim near Niagara Falls ended in tragedy after Webb was sucked into a whirlpool, hit the rocks and subsequently died. He had been pursuing a princely sum of £12,000, which would be awarded following a successful swim through the tempestuous waters. Tragically he appears to have underestimated their power.

Above: Niagara Falls in Canada (source)

In 2012, as part of an arts project in Scarborough , people were filmed treading water for a film/projection entitled ‘74 Seconds’ – a nod to Webb’s 74 hour stunt in Scarborough Aquarium. Indeed, Captain Matthew Webb has certainly not been forgotten, although is understandably best remembered for his pioneering Channel swim, rather his subsequent celebrity appearances.

Heroes of Swimming (The Guardian)