When enterprising businessman William Morgan took over Scarborough Aquarium in 1887, the venue was widely viewed as a colossal waste of money. In spite of the grandness of this underground palace – designed by legendary architect Eugenius Birch – its extensive tanks and sea life specimens were failing to draw in the crowds. 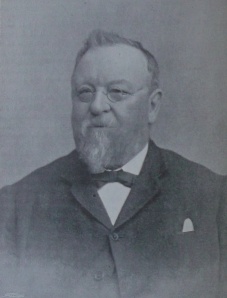 Above: William Morgan, temporary saviour of the Scarborough Aquarium (source)

Morgan, described affectionately as “portly, bespectacled and bewhiskered”, saw great potential in the Aquarium. People, he argued, “would rather see a juggler than an uncooked lobster”.

In 1887 he oversaw the conversion of a number of tanks – glass and seawater were replaced by shops, stalls, a Japanese theatre, teahouse, monkey house and aviary. However, more importantly, Morgan saw to it that some of the biggest names in music hall were performing at the aptly named People’s Palace and Aquarium, also known as the Palace of Amusements.

Above: The entrance to the Aquarium, depicted on an old postcard (from the author’s collection)

The following post will consider two of these stars, whose legacies have endured into the present day.

Along with the team of “lady swimmers and high divers”, she frequently performed with, Miss Ada Webb was an accomplished athlete and acrobat.

Miss Ada Webb shares with Britannia the title of “Empress of the Sea”. She has dived into the sea from a height of fifty-six feet, and therefore claims the distinction of being the champion lady diver of the world. Her underwater feats in the tank are those to which music hall audiences have become accustomed, and her symmetrical form lends grace and attractiveness to her various posings in the crystal tank.

Although the feats of male swimmers, such as Captain Webb (no relation) were generally regarded with greater respect and gravitas, both men and women performed some strange aquatic tasks, much to the delight of onlookers. One of Webb’s was his 74 hour swimming marathon in Scarborough Aquarium. His namesake Ada engaged in various water-based activities across numerous venues:

in October 1889, Ada Webb, ‘Champion Lady High Diver of the World and Queen of the Crystal Tank’, appeared at the Canterbury Theatre of Varieties where her underwater feats included eating, drinking, smoking, peeling an apple, answering questions, sewing, singing, taking snuff and writing.

Rumour has it that Miss Webb also saved the lives of three female swimmers at Bromley Swimming Baths in 1890, diving in whilst fully clothed. She was also an accomplished acrobat who performed aerial stunts. However, inevitably her athletic abilities eventually waned, prompting a move into theatrical management. Her time in Scarborough was presumably only a small part of a whirlwind tour of music halls and entertainment venues.

Prussian-born Carl Unthan reputedly escaped being smothered by the midwife who delivered him, having been born without arms. Remarkably he grew up to become a serious musician, after being encouraged by his father to use his feet for everyday tasks. He even performed for renowned composer Johann Strauss in Vienna.

Above: Carl Unthan plays the violin with his feet (source)

Although Unthan performed with classical orchestras as a violinist, he also developed further tricks to showcase his other remarkable abilities, which included shooting a rifle with his feet. He appeared a silent film, called Atlantis and typed up an autobiography – again with his dextrous feet.

Above: Shooting a rifle (source)

Unthan’s story depicts a man who was independent and shrewd – he knew how to exploit his unique skills, and is rumoured to have arranged for strings on his violin to break, mid-performance, just so that audiences could witness him fixing and tuning them with his toes.

Maybe he played this trick on Scarborough audiences during his Aquarium visit?

Unthan died in 1929, aged 71, by which point Scarborough Aquarium had been rebranded as Gala Land.

Above: Gala Land operated between 1925 and 1966 (source – unnamed newspaper or magazine article in Scarborough Library; see bottom of the page for details)

Many of the music hall stars who visited the Aquarium, however, are difficult to track down.  Mr Walter Wode, lady impersonator; Miss Flo Everette and her Clever Canine Pets; Zasma the acrobat, and perhaps most intriguing of all, the Clock-Eyed Lady. Who were these fascinating characters? Stories From Scarborough hopes to find out more about the stars of the Aquarium and it’s later reincarnation – Gala Land. Keep checking back to read all the new stories!

Are there any music hall history buffs out there? Does anyone know anything about the acts mentioned? Please do comment or get in touch.