Marvel’s Amusement Park is the most popular attraction on Stories From Scarborough; or rather it seems to attract the most clicks from curious visitors. You can read more about the site and its history by visiting the following links:

Memories From Marvel’s (Mark’s memories of the attraction)

For everyone who is curious about Marvel’s, this post offers more clues as to what the park once looked like, starting with the enticing adverts that brought visitors in their thousands.

All images in this post have been kindly donated by Leonie, who also shared these images of the Millennium Experience, and this video of Atlantis. More of her collection can be viewed on the new Stories From Scarborough Flickr Page. See the disclaimer for copyright regulations. 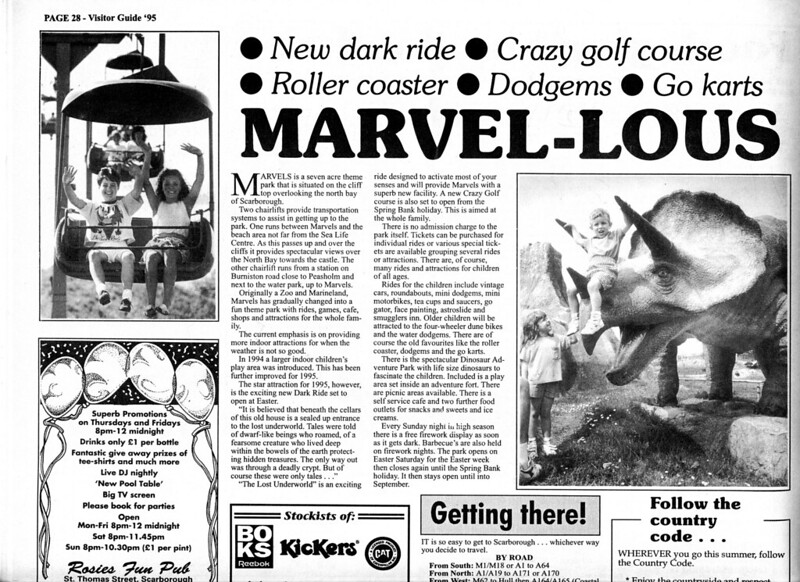 Above: Newspaper article from 1995 (source)

On the top left are the famous chairlifts. The chairlifts were originally proposed during the early days of Scarborough Zoo, which opened in 1969, but numerous delays meant that they didn’t take any passengers until 1972. Once painted in a multitude of colours, they were later colour coded red (for the North Sands route) and green (for the newer Peasholm Gap route). 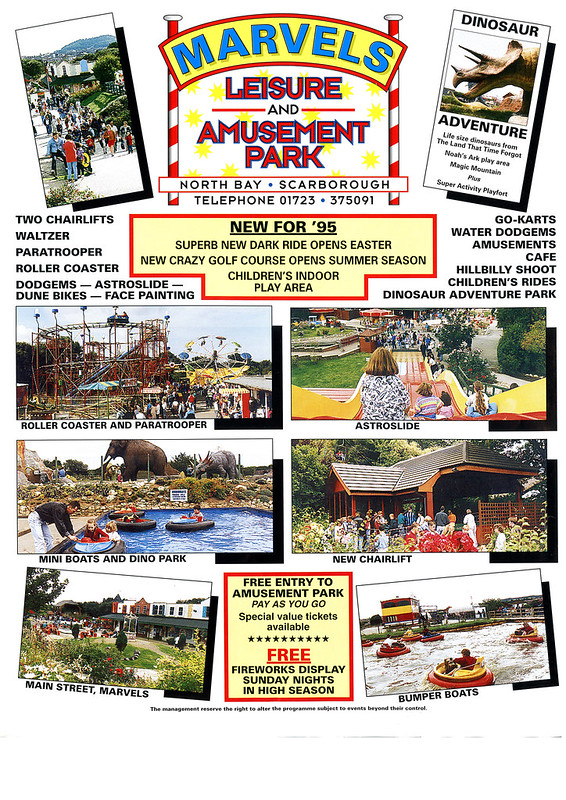 Above: Promotional design from 1995 (source)

The colourful pictures in this poster contrast sharply with the overgrown ruins that stand on the site today. It is barely even possible to guess where each feature stood, apart from the chairlifts – remnants of which can still be seen. 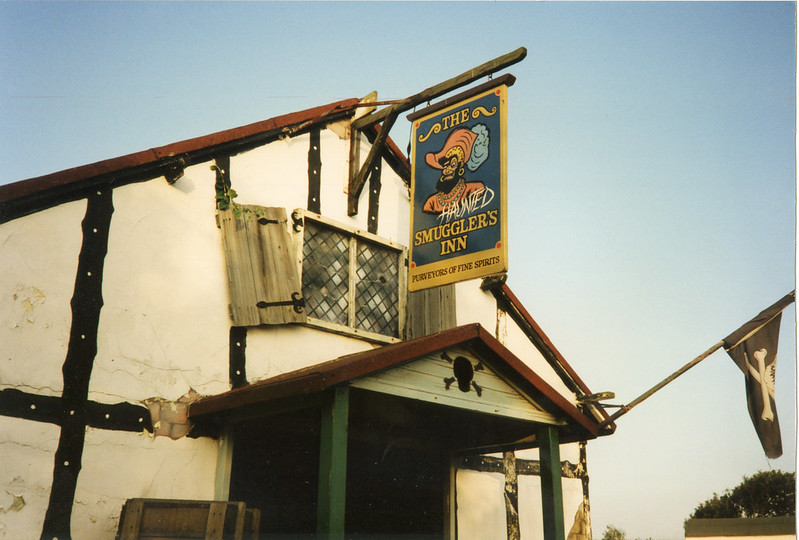 Above: The Smuggler’s Inn (source) 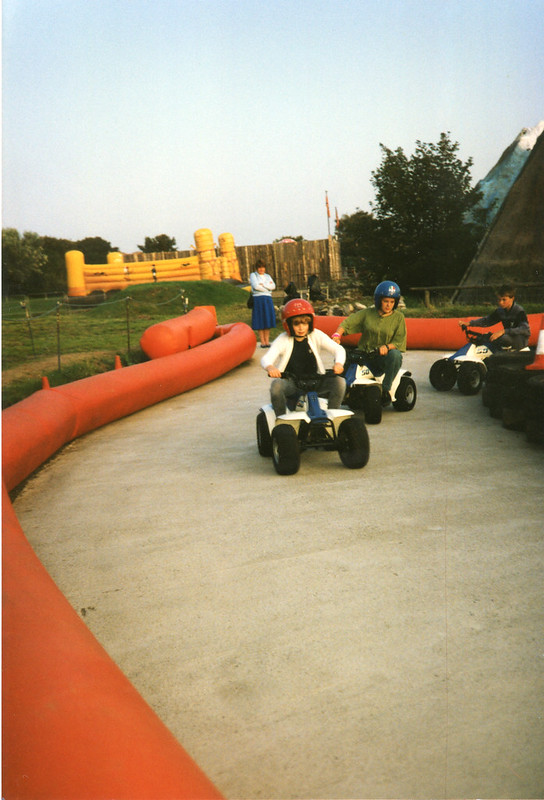 Images like these are crucial in ‘remembering’ the different parts of the former amusement park, which underwent several makeovers between the zoo years of 1969 – 1983, and the Marvel’s era of 1984 – 2002. 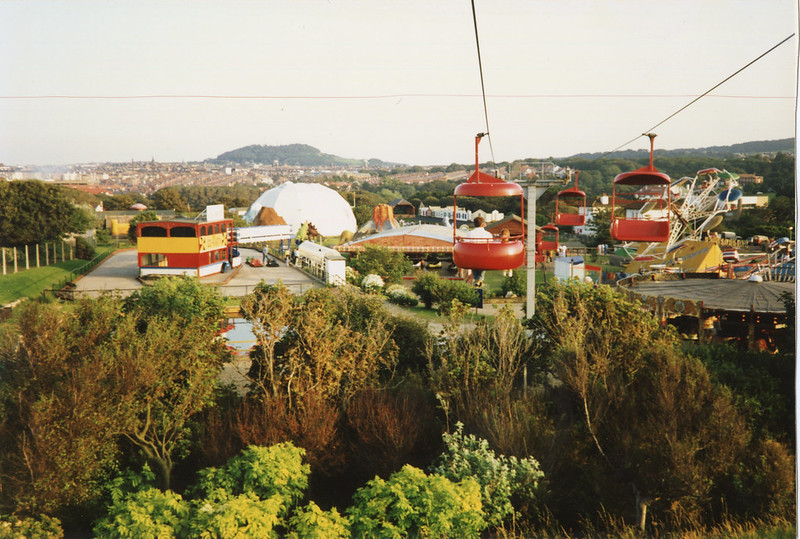 Above: A stunning view from the ‘red’ chairlifts in 1992 (source)

Apparently the chairlifts took more passengers to the park than they did away from it, a trend that initially puzzled founder Don Robinson during the early years of their operation in the 1970s. Perhaps the novelty quickly wore off? Nonetheless, there was always plenty to do once visitors arrived at the attraction.

Below: The Astroslide – one of the many features in 1992 (source) 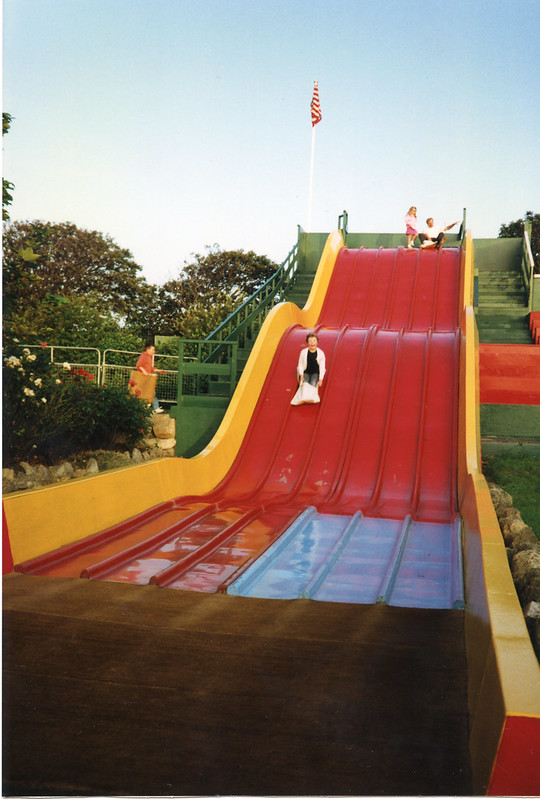 Note the American flag – indeed, when Don Robinson originally proposed the development of this site, back in the late 1960s, he promised a mini-Disneyland, inspired by the blockbuster parks in the USA. Marvel’s original name was Marvel’s Showtime USA Fun Park. Stories From Scarborough also holds images of promotional material from the Scarborough Zoo era, but that will have to wait for another post!

Once again, thanks to Leonie for the photographs, and please do get in touch if this has triggered any memories. All contributions are welcome!

Please note that all images in this post are copyright protected via Stories From Scarborough – please read section 1 of the disclaimer to find out how to link to this material and how it may be used. It is important that all donated material is protected from improper or unauthorised use.

3 thoughts on “Marvellous Images (Of Marvel’s)”