This post is part of a series featuring a fantastic collection of photographs contributed by Leonie, which includes images of Marvel’s, Millennium and a video of Atlantis.

Next up is an old favourite – the Hispaniola, during its days on Scarborough Mere. You can read more about it on the following links:

Voyage of the Hispaniola (Brief summary and history)

A Tale of Two Ships (The ‘other’ Hispaniola in Scarborough)

Pirates in Scarborough (The Hispaniola crew)

All Aboard The Hispaniola! (The attraction today)

The following pictures come from the final years of the Hispaniola outings on Scarborough Mere during the early 1990s. Shortly after they were taken, the scaled down imitation schooner was temporarily held near Water Splash World (later Atlantis), before being repaired and relocated to Scarborough Harbour, where it now sails during the summer season.

As before, please be mindful that the following images are copyright protected – do not reproduce or use without permission (see the disclaimer for details) 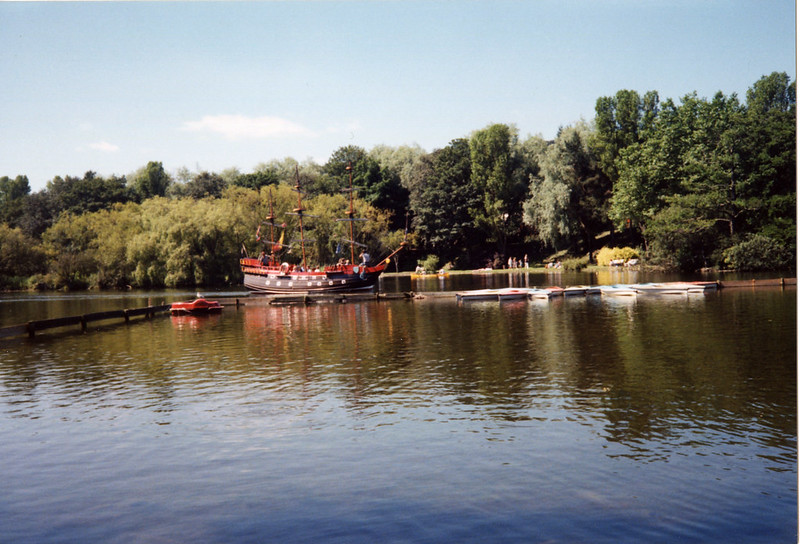 Above: The Hispaniola, a Treasure Island inspired boat (source)

This photograph was taken in 1992 – the Hispaniola left the Mere for good the following year. However, there are still reminders to this day. The landing stage, down which excited children would dash to board to boat, still stands near the Mere entrance. In the background Treasure Island – a small isle fortified with tons of sand back in 1949 (when the Hispaniola outings first began) can be seen. The boarding point too is still visible, although there are no longer any pirates or treasure. 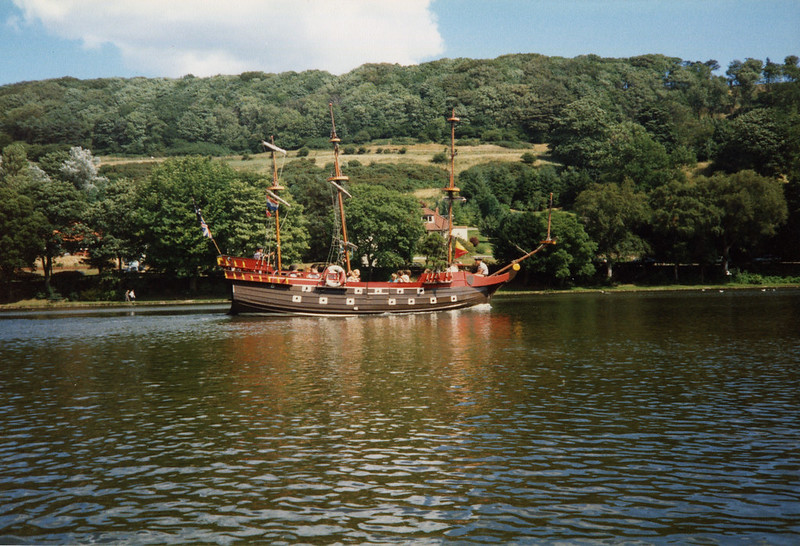 Viewed a little closer, it is possible to see the incredible attention to detail in the vessel’s construction. Indeed, when the boat was originally built, back in the 1940s, its creators aimed to emulate the literary Hispaniola as closely as possible, consulting three separate editions of Robert Louis Stevenson’s famous novel. In spite of contradictory details in the various copies of Treasure Island (apparently), the quarter scale model was deemed a fitting tribute. 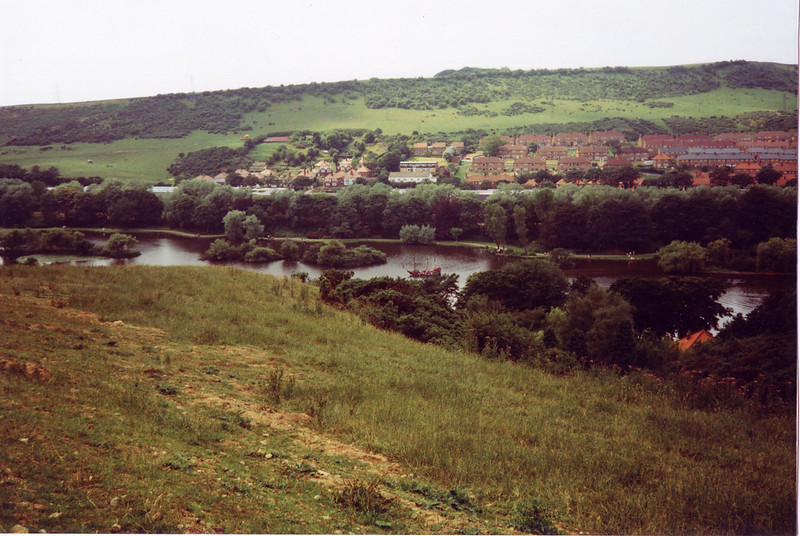 Above: A view from a distance (source)

Looking down from the side of Oliver’s Mount, the Mere is a picturesque place – not exactly somewhere one would expect to encounter pirates. Today the nearest equivalent would be a grumpy fisherman! Whilst water sports occasionally still take place there, the shores are more frequently lined with angling enthusiasts. During the days of the Hispaniola, the calm waters would be frequently disturbed by rowers and canoeists, taking advantage of the hire boats available there. 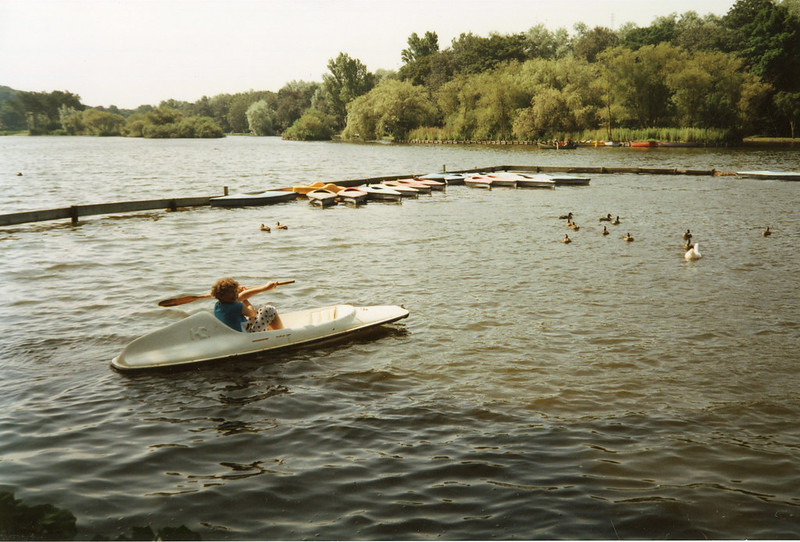 Above: Canoeing at the Mere (source)

There was also a cafe which has since been demolished and updated with a newer, log cabin style eatery. And who could forget, the pirates? 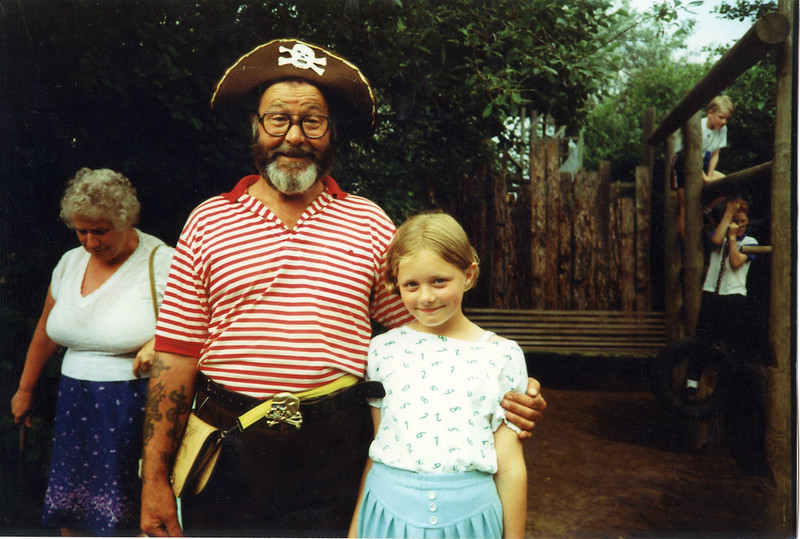 Above: When there were pirates…(source)

Back in 1949, the Hispaniola management team were desperate to recruit a genuine one-legged man to play Long John Silver. They found such a man in Tom Hunt, a war veteran who wore a real wooden leg during his command of the boat. Sadly he died not long after the attraction took its first season of passengers. Later incarnations did not share his one-legged credentials, but nonetheless, the staff across the decades maintained a lively pantomime of characters – no longer does the Hispaniola boast such a charismatic crew. Nor are there any doubloons for children to find.

Above: One of the doubloons that was buried at Treasure Island (from Leonie’s personal collection)

Or even an island, adorned with a look-out tower, hut for Ben Gunn and his parrot, and an array of pirate accoutrements. Fortunately many visitors recorded this much loved attraction, and Stories From Scarborough would love to hear from more of you. Not only your pictures, but any stories you might have also. And opinions on the current reincarnation of the attraction.

Thanks again to Leonie for the images in this post, and please do get in touch if you’ve ever been aboard the Hispaniola – past or present.