Stories From Scarborough has so far been privileged to share a video of Atlantis, and pictures of Marvel’s, Millennium and the Hispaniola from generous reader Leonie, who has uploaded her collection to the project Flickr account.

Now it’s time for Water Splash World. This, and its other incarnations (North Bay Bathing Pool, Waterscene and Atlantis) are quickly catching up with Marvel’s, in the battle for the title of ‘most viewed’ attraction on Stories From Scarborough. To find out more about the site and its swimming history, please take a look at the following posts:

The Blue Waters of Atlantis (brief history and introduction)

Swimming In Scarborough: Battle Of The Bathing Pools (the story of the North and South Bay bathing pools)

Before The North Bay Bathing Pool: The Northstead Estate (more about the site of the pool)

North Bay Pool: For Bathing Or Boating? (the early days of the North Bay Bathing Pool)

For now it’s back to a very specific period in the site’s history – indeed, Water Splash World started out in 1987. Its predecessor, Waterscene had opened in 1984, as a dramatic new development of the longstanding North Bay Bathing Pool (an attraction dating back to the 1930s).

All of the following images are copyright protected and must not be used or reproduced without permission – see the disclaimer for details. 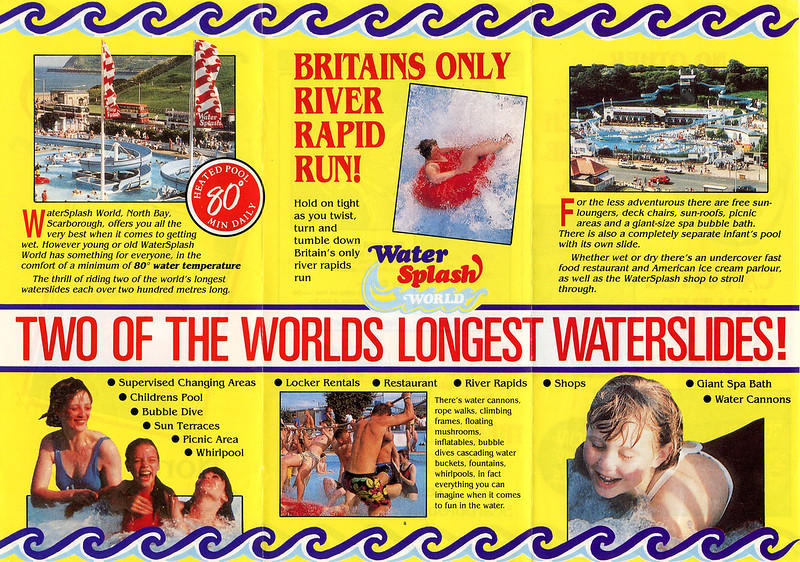 Below: As above (source) 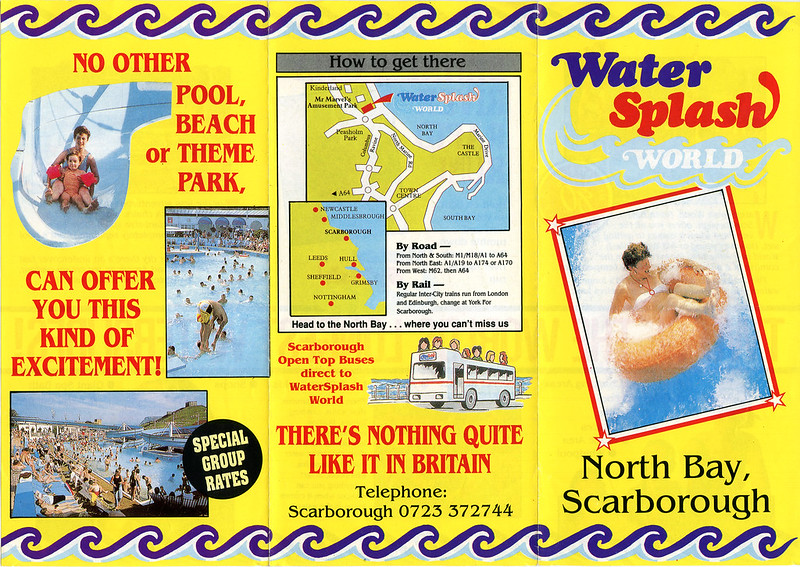 Water Splash World was an outdoor swimming pool with water slides, located opposite Peasholm Park near the North Bay in Scarborough. Previously known as Waterscene, the new name marked a change in ownership and a further opportunity to market the attraction’s record breaking water slides – then the longest in Europe, and amongst some of the biggest in the world at the time. 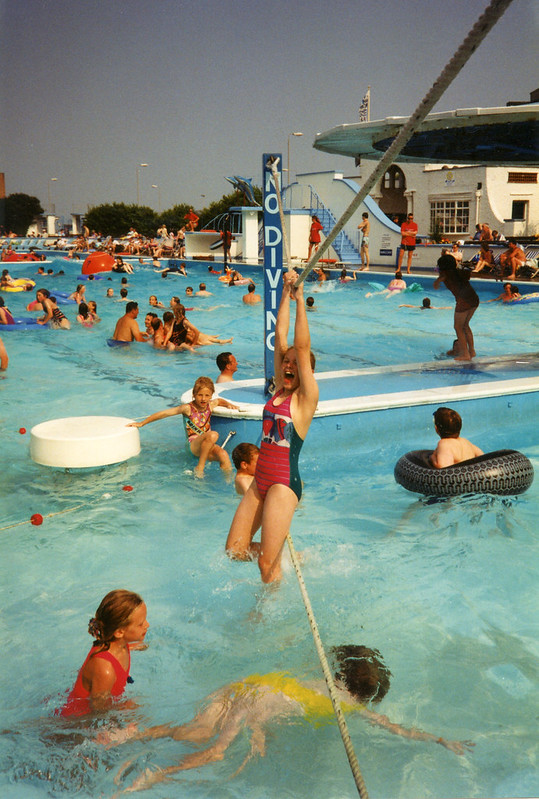 Above: Water Splash World on a glorious sunny day (source)

In spite of the new slides and slick marketing, the pool retained many of the features from the days of the North Bay Bathing Pool, including the gates, walls and changing room buildings. Indeed, the name of the water park changed more than its key features, and Atlantis was simply another opportunity to revitalise the attraction. 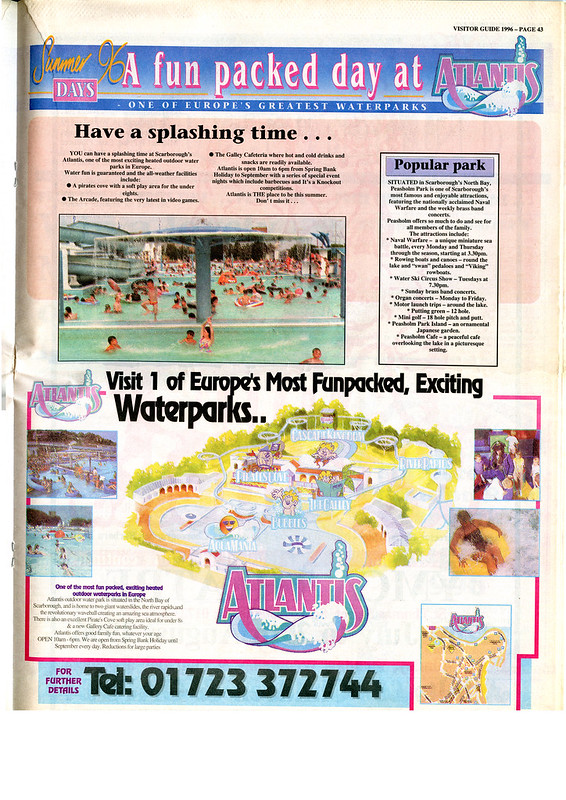 Above: The then new Atlantis (source)

It’s amazing what a new logo and fresh branding can do for an attraction. Indeed, Atlantis gave the pool’s themed areas sparkly new names – Cascade Kingdom, Pirate Cove and Aquamania were just a few of the jazzy titles that graced maps of the pool. Atlantis of course refers to a fictional (but legendary) island (created as an allegory by Greek philosopher Plato), which is eventually consumed by the Atlantic Ocean after its people fall out of favour with the gods. The relevance of this title to a 1990s Scarborough water park is perhaps somewhat unclear, although the word does seem to conjure up images of an exotic and mysterious world. 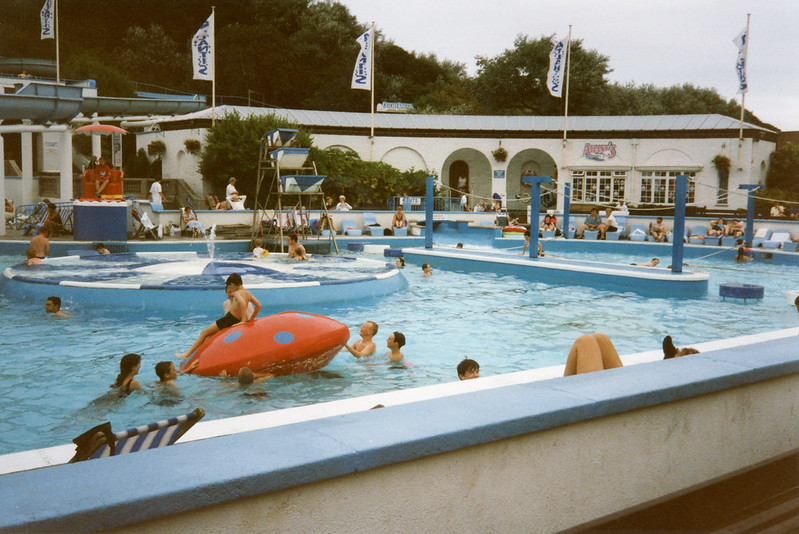 Below: The famous slides (source) 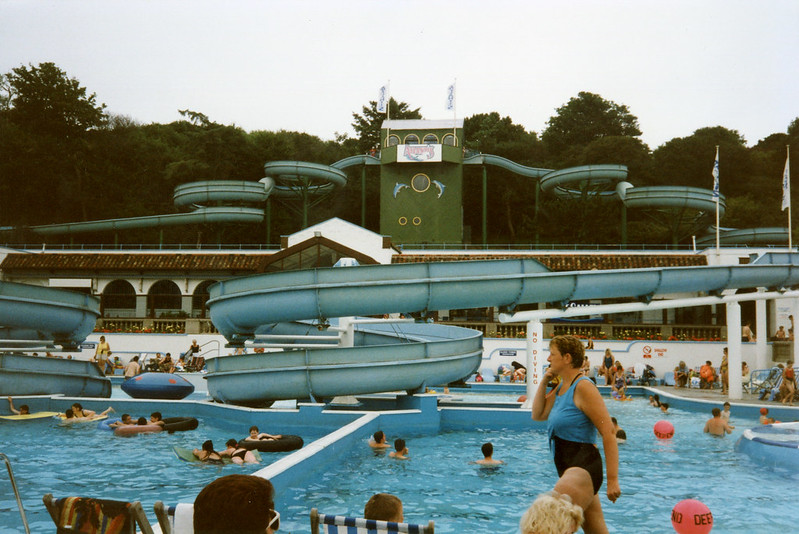 Indeed, there was little evidence of any ancient civilisations here – the oldest features were, as mentioned, the white buildings and walls that remained from the North Bay Bathing Pool. These can still be seen today, housing the Military Adventure Park. Atlantis closed in 2007 and was later dismantled.

Thanks to these images, it is possible to look back on the days of blue water, thrilling slides and outdoor swimming. Do you remember swimming here? What was it like? Please share your stories before they fade away like Atlantis!

As before, Stories From Scarborough is very grateful to Leonie for sharing these pictures – please respect this generosity by abiding with the copyright regulations outlined in the disclaimer.

9 thoughts on “Pictures Of Water Splash World And Atlantis”