On Wednesday September 16th, 1925, a runaway tram smashed through the roof of the Scarborough Aquarium.

You can view video footage of the crash site here.

This happened either shortly before or after the venue was purchased by the Scarborough Corporation and re-named Gala Land. Either way, the ballroom roof was completely destroyed, and pictures show streamers and decorations surrounded by wreckage and chaos; the tram car balancing precariously on one end, amidst debris on the ballroom floor. 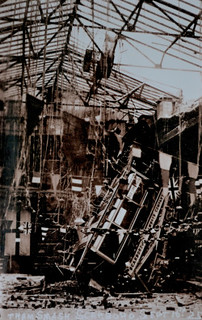 Above: The crash scene – image purchased by Stories From Scarborough; please do not copy without permission (hosted here)

There is some confusion as to the number of the streetcar that crashed. Some reports say it was number 25, others state number 21. The latter is most likely, and is supported by many accounts of the event. Part of a fleet of trams, delivered to Scarborough in 1905 (the tramways opened a year earlier with an initial fleet of 18), the tram in question was driven by 32-year old George Darley Smith on that fateful day on September 16th. 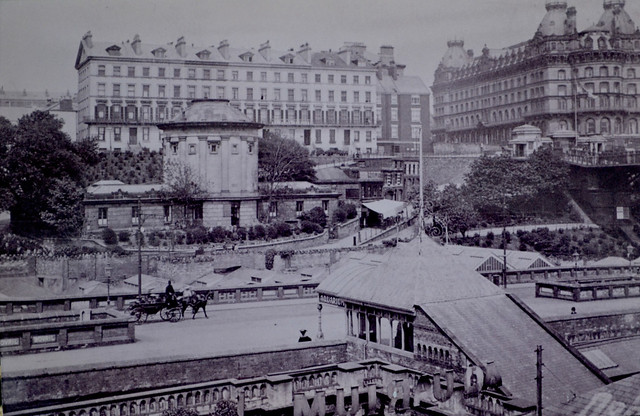 Above: The Aquarium before the tramlines – image purchased by Stories From Scarborough; please do not copy without permission (hosted here)

As he ascended Vernon Road, the tramcar faltered, then began to slip backwards. Sensing impending disaster, the conductor, Mr A. Wike, and two passengers (a PC Robinson and his wife, from Pudsey) jumped clear, but Smith, certain he could stop the car, crashed through the wall that separated the road from the Aquarium, and plummeted thirty feet through the ballroom roof. No one expected to find him alive, let alone with relatively minor injuries.

The back of his head is still bandaged, but the rest in hospital did him a lot of good. Our Scarborough correspondent saw him for a minute or two yesterday morning in the hospital, but he did not feel he could enter into details as to how the accident happened. All he would say was that he felt quite confident to the last second that he would be able to bring the car to a standstill.

Similarly, Mr and Mrs Robinson didn’t escape completely unscathed. Both suffered severe shock and the latter dislocated (or broke, depending on which report you read) her ankle, necessitating a brief stay in hospital. As for the tramcar – in the days following the crash it remained in the ballroom – a tarpaulin sheet covering the shattered roof, and a wooden board concealed the gap in the wall above. The tram was later removed in pieces, and replaced on the circuit by a new car. The Ministry of Transport were also informed, so that an investigation could be carried out. It was found that the tram had lost its grip, and the stretch of track in question was problematic, thus freeing George Darley Smith from any blame. 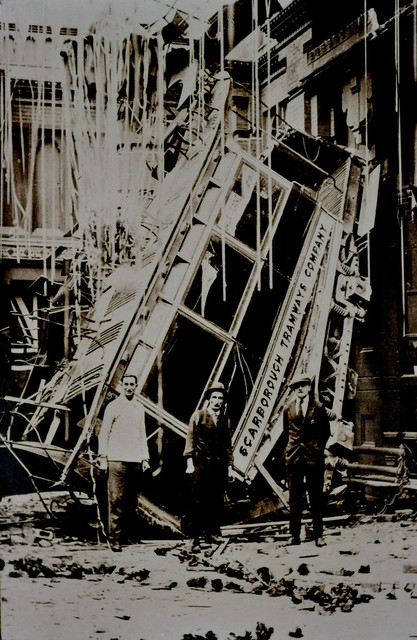 Above: Three unnamed men pose beside the stricken tram – image purchased by Stories From Scarborough; please do not copy without permission (hosted here)

The then manager of nearby Scarborough Corporation Baths – Herbert Shaw – was one of several rescuers who came to Smith’s aid. The pair had been childhood friends, and Shaw recounted an amusing anecdote, which bore striking similarities to the tram driver’s plight:

…this is the second time that he has rescued Smith from a peculiar predicament. The first was when they were schoolboys. They were playing together with other schoolboys near to Wilson’s Wood, at Scarborough, with a bogey used for carrying clay down the lower end of the dell. The truck got out of control and all the boys on her jumped clear except Smith, who got landed in a pond at the bottom of a steep inclined, and Shaw pulled him out with a pole.

As for the Aquarium, or Gala Land as it was then known – the cancellation of dancing in its illustrious ballroom was only temporary. Stories From Scarborough has been unable to locate details of when repairs were completed, and the tramlines closed in 1929, thus preventing further possible accidents of this nature. Further research suggests that George Darley Smith, whose remarkable escape captured the attention of newspapers across the country, sadly died during WWII. Reports indicate that he saw active service, although the nature of his death is unknown – if indeed this is the same person (ancestry records, key dates and so on all point toward this being the case).

The next disaster to hit Gala Land was its destruction in 1968. This, however, was a planned event.

There would be no repairing on this occasion.

Ticket To Disaster For Tram Passengers