The World of Holograms was an attraction located in the upstairs gallery at Corrigan’s Amusements (now Coney Island Amusements) in Scarborough. There is very little information about it – minimal evidence of its operation spans across the late 1980s and early 1990s, although exactly when and for how long it was open have yet to be uncovered by Stories From Scarborough. 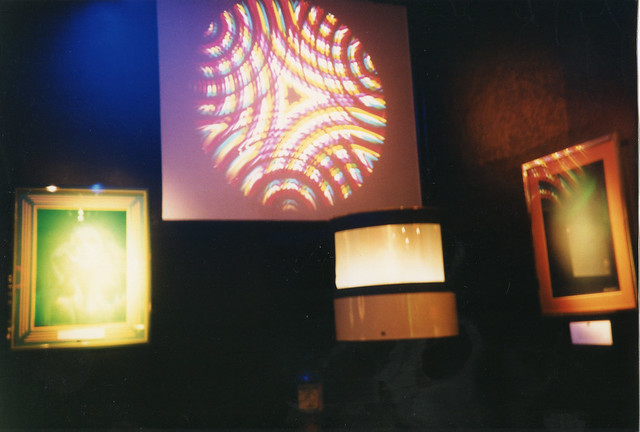 Above: Inside the World of Holograms (source)

The building that housed the attraction is distinctive. The exotic architectural details and suggested tower serve as reminders of its former status – it was once a Turkish Baths. You can view a picture of what it once looked like by visiting this link.

Below: The Turkish Baths can be seen in the centre of this image from the early 1900s – note the prominent tower (from the author’s collection)

Known as Bland’s Cliff Turkish Baths, the bathing facilities were created by the Scarborough Public Bath Company and were open between 6am and 10pm daily, except on Sundays. They first opened in 1859 and closed in 1931. Visitors paid 6d. to swim in a large seawater pool, with numerous personal bathing options added in subsequent years, including vapour baths, showers of various kinds and freshwater alternatives. All incurred an additional charge, and access was directly from the beach – the foreshore road did not exist when the baths first opened (it was built in 1879).

You can view an even earlier picture of the baths here.

Turkish baths were popular in Victorian Britain, as was the appropriation of Oriental architecture (also found in Scarborough’s spectacular underground aquarium). The baths were designed to cleanse and relax visitors, who would immerse themselves in seawater, and take advantage of the various treatments on offer. The exotic, otherworldly surroundings emulated a temple-like atmosphere, a nod perhaps to the religious roots of Turkish bathing, and the notion of spiritual (as well as physical, and emotional) cleansing and purity.

[The building] brought more than a touch of the mystic East to Scarborough’s sea front, with its Moorish arches, red-and-white brickwork, and mosque-like water tower crowned with a dome.

Like many of Scarborough’s former attractions, the baths eventually succumbed to financial losses, and were sold first in 1904. They operated under a different company until 1931. Two years earlier the Scarborough Corporation had opened a Turkish baths at nearby Londesborough House, and Scarborough offered a range of bathing options and alternative entertainments, which perhaps eclipsed the Bland’s Cliff Baths. Indeed, such attractions significantly declined in popularity as the twentieth century unfolded, and only a handful of original Turkish baths remain in England today, one of which is located in Harrogate. A glimpse at the stunning interior hints at what Scarborough’s own equivalent might once have looked like. Perhaps.

Above: A lounge area at Harrogate’s Turkish baths (source)

What happens next is somewhat unclear – the building was altered on numerous occasions, and much of the ornamental detail was lost in favour of a simpler design. The tower in particular was severely diminished. During the latter part of the twentieth century, the baths were taken over by the Corrigan family, who established a small empire of amusement sites and fairgrounds in Yorkshire. Initially working as travelling showmen, Jimmy and Albert Corrigan settled in Scarborough during the 1950s – the former acquired the Turkish Baths as well as founding the Luna Park fairground site on the seafront.

Above: Luna Park – see below for image credit (source)

It was during the Corrigan tenure that the World of Holograms made its debut. Above the noisy chaos of the slot machines downstairs, visitors could marvel at optical illusions and light displays on the second floor. Rumour has it that live action was also involved at one point.

As is the case with many attractions in Scarborough, documentation is frequently located in personal, rather than public collections. This is why each article on this site is accompanied by an appeal for information and images. There is only so much available in public collections, so if you know anything or have any kind of documentation (leaflets, tickets, images), please get in touch. You don’t even have to share anything publicly – even a small piece of information would help.

Although the World of Holograms has been and gone, its home still remains as an amusements site. The Corrigan tenure ended in 2008, and the building was sold to Stade Developments – a company based in Hastings. Prior to being sold the name had changed from Corrigan’s Amusements to Coney Island – the same name as a Brooklyn beach destination in New York, USA. Coincidentally, the real life Coney Island also has a Luna Park fairground attraction, although the shared names are undoubtedly an intentional emulation.

Just as Marvel’s Amusement Park (and indeed, its predecessor Scarborough Zoo) sought to emulate all things American (particularly Disneyland), it seems that this is a continuing trend. Note that the copying of Eastern styles seems to have been firmly left behind in the Victorian era.

Above: Today’s Coney Island – see below for image credits (source)

Scarborough’s Coney Island is still an amusements attraction, but the building is a shadow of its former self, and neither interior nor exterior bear much resemblance to the imposing (and intricate) temple-like bathing house that once graced the sandy foreshore. The World of Holograms was but a flicker in this long history – the lack of available evidence surrounding its existence makes one wonder how many other attractions have vanished without a trace.

8 thoughts on “Before The World Of Holograms”