The Corner Cafe opened in 1925. Located on corner, opposite Scarborough’s North Sands, the cafe sold food, drink and entertainment for decades until it was eventually demolished in 2007 to make way for the brand new Sands development. 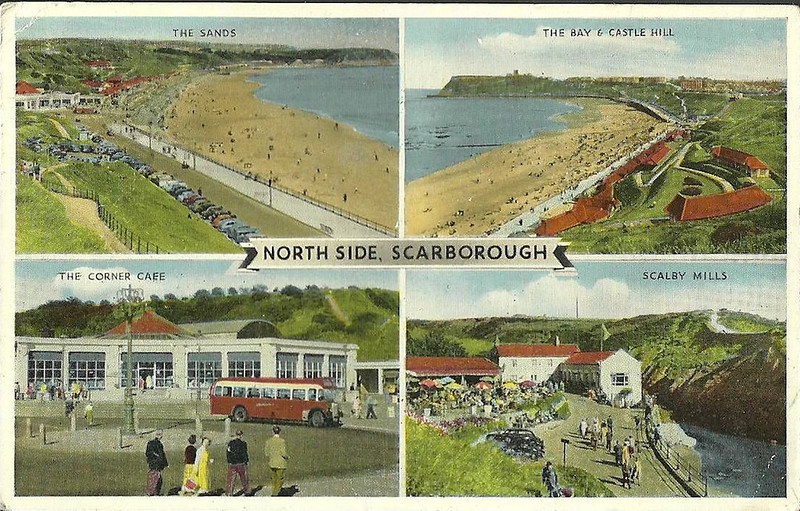 Above: The Corner Cafe can be seen on the top and bottom left of this multi-view postcard (from the author’s collection)

The site now hosts apartments and modern retail units. You can read more about the cafe’s history by visiting the following links:

Have You Even Been To…?

Bertram Otto And His Model Railway

In this post, a regular contributor to Stories From Scarborough – Mark – has kindly shared some more up to date memories of the cafe from the 1990s. You can read more of his memories about other former Scarborough attractions on the following links:

His first memory of the Corner Cafe references the its model railway. Having hosted the world’s (then) largest and most intricately constructed model railway in the 1960s, the Corner Cafe apparently acquired its own smaller model. What happened to the larger version, which was then on tour, is something of a mystery.

I have a vague recollection of a larger scale, something like G scale I think, track going back and forth on a high up ‘shelf’ in the corner cafe, when me and mum used to call there to eat – I was always fascinated by it. At that point, I never knew the other model railway had existed.

Indeed, the original model came to Scarborough many decades earlier. Mark also remembers the entertainment at the cafe, which hosted names from both home and away, including early career performers and, during the cafe’s heyday in the 1960s and 70s, bigger stars also.

We usually went to a show there, most years – it wasn’t generally anyone famous, but kids/childrens entertainment, till I eventually became too old for them – at which point we transferred to shows at the futurist.

Sadly Scarborough’s Futurist Theatre closed early this year – its future at present remains uncertain. The Corner Cafe, on the other hand is now just a memory. Those who never visited will thus rely on those who did, to find out what it was like inside.

I remember always trying to sit in near the high windows, as we liked to look out onto the north bay as we ate – they used to do a kids lunch meal, and I often wound up taking some of it with me – I wanted to get onto the beach and build sand castles!

I remember there being something of a ‘square’ outside the Corner Cafe (although, it definitely wasn’t square) where there always used to be a booth, where an elderly gentleman sold newspapers and scratch cards – it used to be a daily treat, to get one of those scratch cards – we even won, sometimes!

The only other thing that really sticks in my mind about the Corner Cafe, is it (at one point, anyway) seeming to be a massive white ‘cliff’ almost, to a young me.

Thanks to Mark for continuing to share his memories with the project.

Did his recollections bring back any memories for you? Did you visit the Corner Cafe in Scarborough? Please get in touch or comment below.