When Scarborough’s Open Air Theatre opened in 1932, in the heart of the new Northstead Manor Gardens, it was clear that this was to be no ordinary theatre. Actors occupied a stage in the middle of a lake, with an orchestra on floating barges, and performances faced constant threats of wind and rain, both of which could potentially jeopardise ambitious sets and carefully rehearsed musical numbers. 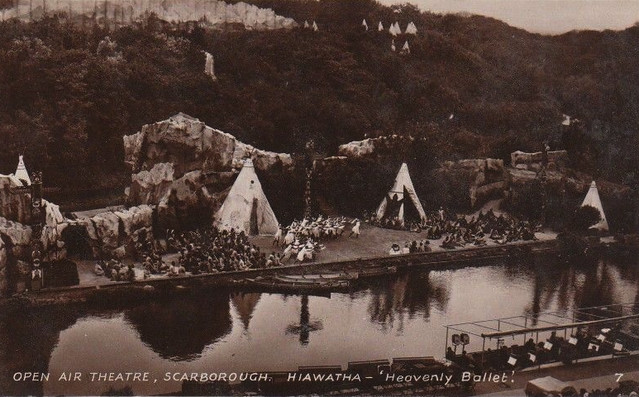 Above: The Open Air Theatre (source)

Yet in spite of the many risks, open air theatre performances enjoyed nationwide popularity in Britain during the 1930s. On July 17th, 1934, the Manchester Guardian noted:

The article then goes on to list a whole host of ambitious projects at range of different locations, including Regents Park (London), a park in Salford (Greater Manchester), Abinger (Surrey), MacBeth in Morecambe and outdoor theatre performances in Cambridge. 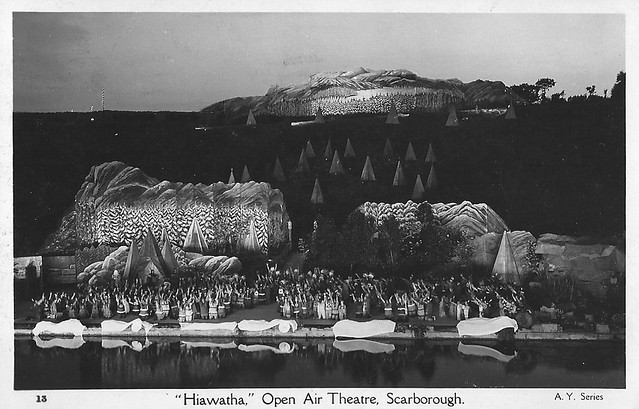 Above: Scarborough was not the only UK location experimenting with outdoor theatre (source)

Nonetheless, the outdoor theatre at Northstead Manor Gardens was surely one of the most unusual examples of this nationwide trend. One journalist at the Manchester Guardian was keen to note how impressed he was with Scarborough’s attempt to showcase Carmen in 1935.

(‘“Carmen” in the open air: Scarborough experiment’, The Manchester Guardian, July 19, 1935 – all subsequent quotes are taken from this article)

The author, referred to only as G.A.H, had been invited to witness a rehearsal for the show on a unsettled grey day. His concerns lay mainly with how Carmen, a complex opera with many subtle and complicated musical moments, would fare in the open air, without a roof or walls to contain the acoustics and help the audience connect with the music.

The orchestra is placed in barges or rafts fronting the stage. The scenery is devised so that it may be sufficient for theatrical purposes while blending with natural surroundings…

However, he notes that:

…the music kept to a surprising degree its warmth and intensity…

He even names the key cast members: Miss Constance Willis as Carmen, as well as Mr Arthur Cox and Mr Redvers Llewellyn as male principles. There’s a postcard showing them below: 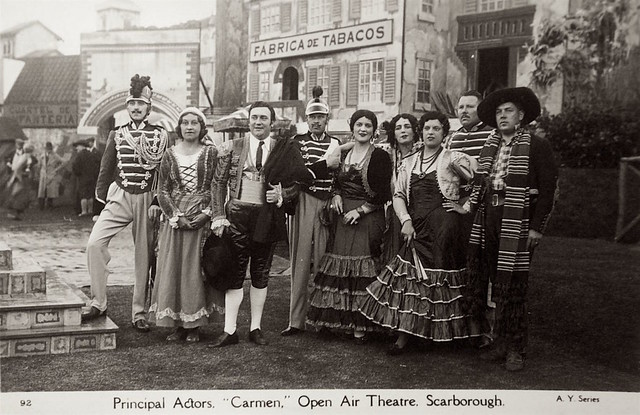 Above: The Carmen cast (source)

The orchestra was directed by Mr A C Keeton, and included 43 ‘sufficiently skilled’ players. 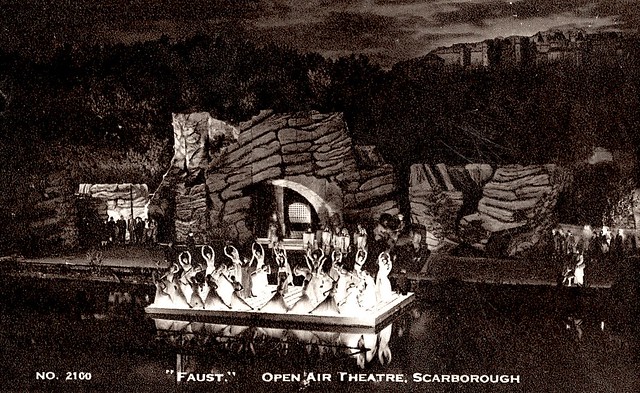 Above: Productions included not just acting and singing, but dancing too (source)

There was also a degree of West End glamour about the production, given that it was produced by a Mr Sumner Austin, who had worked at the Old Vic and Sadler’s Wells in London.

You can view Mr Austin’s directorial and producing credentials by clicking here.

Whilst complementary about the production, the Manchester Guardian journalist highlights the problems facing the cast and technical crew:

…alas that the rain came before it finished…

However, this was not the end of the world, and he notes that:

…a skilful company, good outdoor environment and favourable weather [means that] opera in the open can be artistically achieved…

One can’t help but admire the ambition of the Scarborough Amateur Operatic Society, who, year after year for over three decades embraced the unpredictable British weather to put on show after show of the highest quality.

4 thoughts on “Carmen at the Open Air Theatre”