The 1950s saw the start of the infamous Space Race, which saw Russia and the U.S. compete to master spaceflight capability. The possibility of exploring space caught the imagination of many across the world, and this was the golden age of science fiction stories and films.

Above: Science fiction stories were a big part of popular culture in the 1950s

Destination Moon, Them!, Invasion of the Body Snatchers, Forbidden Planet introduced audiences to the possibility of alien worlds and beings from outer space. The Quatermass Experiment appeared on television from 1953, Journey into Space on BBC Radio (also in 1953) and there was clearly an appetite for these sorts of ideas and stories.

It was perhaps then, inevitable, that this fascination would inspire the British seaside holiday during its heyday.

Indeed, the seaside holiday had become a national institution in the twentieth century, enjoyed by people across Britain from all different walks of life. 1950s Scarborough was at the centre of this boom, and had been one of the country’s most popular and best known resorts for a considerable amount of time. 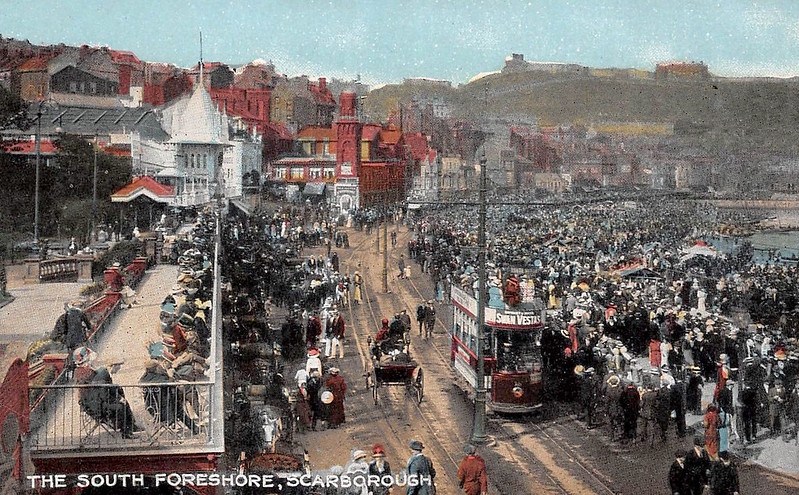 Above: A very busy Scarborough Foreshore during the early 1900s (source)

This was a good time to be the town’s Entertainment Manager, and Mr. Roy Pannell – the man with this prestigious job –  began 1953 with an exciting idea. He had seen a space ship ride in London, and wanted to bring a bigger and better version to Scarborough.  Interviewed by the Yorkshire Evening Post, on 28 Jan 1953, he described his bold vision:

“First,” he said, “one goes into a pressurised cabin and there is a lot of palaver with the shutting of airtight doors and the operating of other gadgets. When the lights go out you are looking at a large porthole, on which is projected a film. This will give the illusion that you are shooting up from the earth, passing stars and planets on the way to the moon.”

“The effect of the film is extraordinary. At the same time the floor on which one is standing is vibrating to give the sensation of movement.”

“In another compartment,” he said, “there would be six moving dioramas of life on the planets. There would be futuristic space cars moving along the roads and buildings and Martian men. By leaning over a rail in the room one would see the moving machinery of the ship. The space-ship pilot would explain all that was going on, and he would have contact by intercom telephone with his crew. Then the travellers would be taken into the cabin they first entered and the controls would be set for the return to earth – the film giving the effect of leaving the moon and going to earth.”

A site – the town’s West Pier – was quickly identified and permission secured from the Scarborough Corporation. The space-ship was to be 60ft long and 20ft high. However, the town’s fishing community were less convinced by these ambitious plans.

Above: Scarborough’s fishermen during the early twentieth century

Believing that the proposed attraction would ruin their place of work on the West Pier, they launched a staunch opposition. In February 1953, Mr. R. T. Blogg, secretary of the Scarborough Inshore Fisherman’s Society, sent a letter to Mr W. Alan Whytock, district inspector of Fisheries, Hull, protesting against the proposal for a £6,000 space-ship on the West Pier for holidaymakers.

Above: For many, the pier was a place of work, not a place for leisure and entertainment

“We do appeal to your Ministry to take up this matter with the Corporation and stop this infringement and allow the fishing industry to enjoy peaceful conditions. If this is not stopped, life will be unbearable down here and it will be most harmful to all those connected with the industry. One of the past permanent officials of the Ministry of Fisheries viewed with much concern the exploitation of the small fishery harbours by the municipalities….”

Ultimately, in one sense at least, the appeal was successful. The West Pier was ruled out as a potential site, but the space ship still made a timely arrival in Scarborough. It was instead placed at the Windmill site in time for the summer season of 1953. 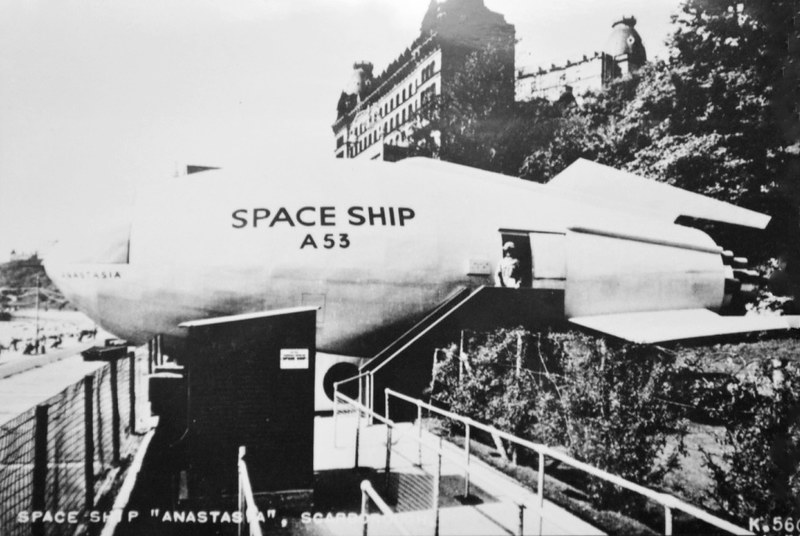 Above: The Space Ship ‘Anastasia’ on the seafront (source)

Nicknamed Anastasia, the spaceship was, in part, modelled on a legendary, but fictional, craft that featured in the Dan Dare stories. Dan Dare was a science fiction hero –  he starred in countless comic strip tales  as a dashing chief pilot of the Interplanet Space Fleet during the 1950s and 60s.

According to the articles in newspapers at the time, this was not the only space ride in Britain. As well as the one in London, which had inspired Mr. Pannell, there are mentions of similar rides in Leeds and Hove. They were also known as ‘Dan Dare’ rides, and might be considered as early precursors to the modern day simulator ride, in which audience seating moves to simulate participation in a projected film.

Do you remember this ride in Scarborough? Share your memories below.