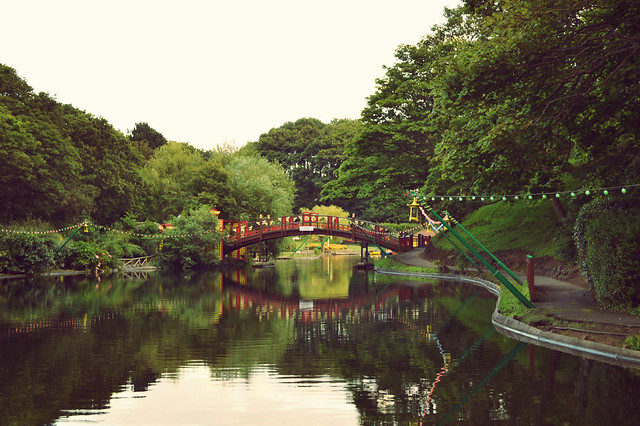 Above: Peasholm Lake and bridge (Copyright: Stories From Scarborough)

This picturesque park was designed in the early 1900s by Borough Engineer Harry W. Smith – creator of many of the seaside town’s landmarks (Floral Hall, the South Bay Pool and Northstead Manor Gardens for example), Peasholm Park was built on land that was formerly part of the Northstead Estate. More specifically, development focused on an area then called Tucker’s Field, transforming a muddy expanse into landscaped gardens. 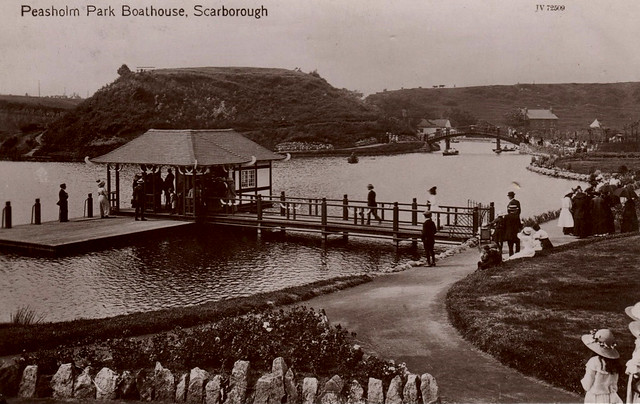 Above: An early image of the new park, before the building of the pagoda (source)

Decades earlier, during the late 1800s, Victorian Britain had developed an obsession for the Far East, and designers eagerly appropriated styles imported from China, Japan and other then ‘exotic’ lands. Indeed, Scarborough’s aquarium was inspired by Hindu temples, and the Turkish Baths, also Eastern-inspired, would eventually become an Indian Village attraction in the early 1900s. Seaside towns sought to emulate far away places in the attractions they offered to visitors, although often perpetuated crude stereotypes in the process. 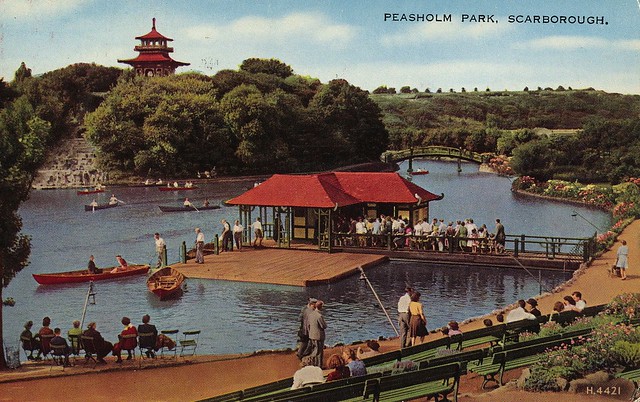 Above: Peasholm Park was not the only Eastern-inspired Scarborough attraction (source)

Even further back, Chinese pottery was much coveted by traders and consumers in the 1700s, so much so that English potters began to imitate their styles (Thomas Minton is typically credited with pioneering this approach). In order to sell this so-called Willow Pattern, Minton and his contemporaries imbued their designs with an exotic story – typically involving a wealthy mandarin and his daughter’s illicit love affair. 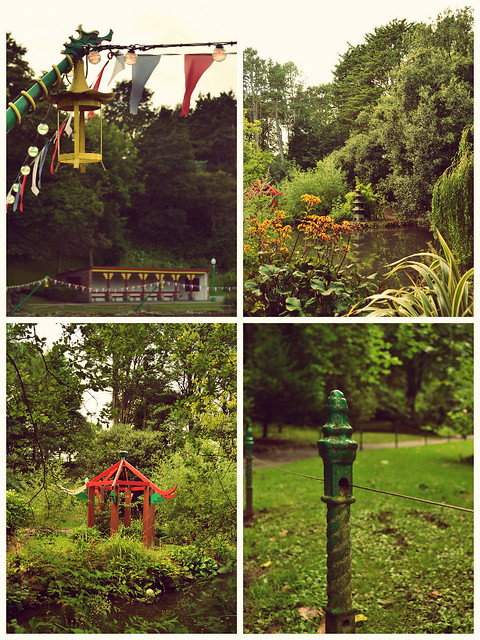 Above: Some of Peasholm’s subtle features (Copyright: Stories From Scarborough)

Ironically enough, such stories were the inventions of enterprising English businessmen, such as Minton, and were not directly derived from authentic Chinese tales per se. Indeed, the Western world created a version of the Orient that romanticised its cultural traditions for consumers. 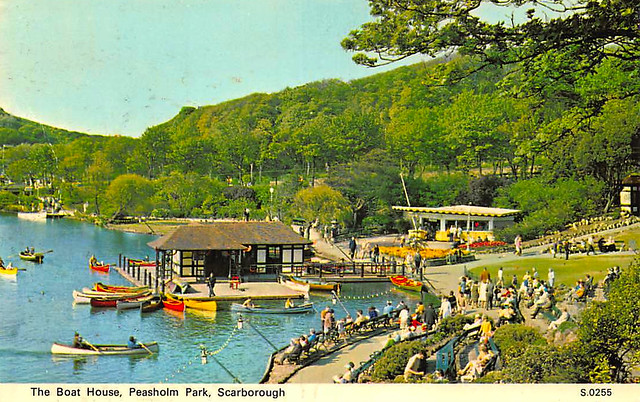 Harry W. Smith was inspired by the Willow Pattern story, and, reputedly also by the beauty of Japanese gardens and architecture. He sought to represent these various diverse threads of Eastern inspiration within the park, which opened on June 19th, 1912, following purchase of the land by the Scarborough Corporation during the preceding year. 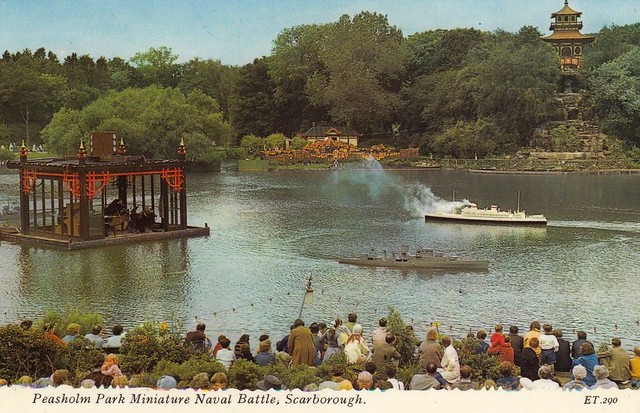 Above: In 1927 the Naval Warfare display was launched at the park (source)

Twentyman had hired Chinese and Italian workers to construct gardens and structures inspired by their respective countries within the grounds of his sprawling new home. He also commissioned statues and ornaments, a selection of which were purchased for Peasholm in 1931, and can still be seen today within the park.

The crowning jewel in Peasholm’s crown, however, was the impressive pagoda, which was designed by architect George W. Alderson and built in 1929. Illuminated at night, perched at the height of a cascading waterful, this imitation of a structure found in both China and Japan, excuded a mysterious aura. Sadly, in recent decades it has suffered attacks of vandalism, although has recently been restored anew. 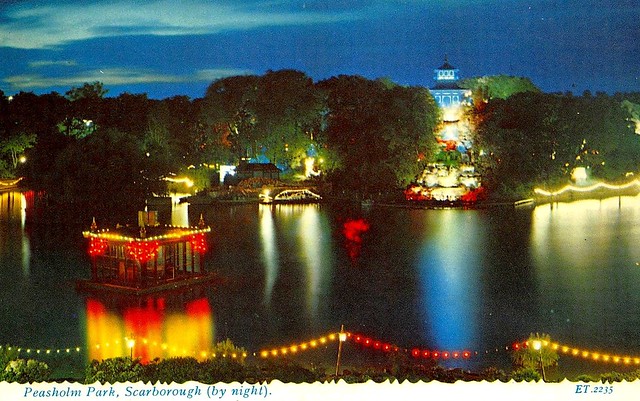 Above: The magical illuminations and the pagoda (source)

Peasholm Park offers a glimpse into perceptions of Chinese (and Japanese) culture and design by Edwardian Britons. Whilst the park is worlds away from the lands it seeks to emulate, it nonetheless creates a striking visual experience for visitors.

Do you know anything more about Peasholm’s Eastern-inspired heritage? Or about the park in general? Please comment below or visit the Facebook Page for pictures, memories and more.

This article by Dav White

More about the Willow Pattern here

In 1859 an exotic building was erected on Scarborough’s Foreshore. The new Turkish Bathing House, also known as Bland’s Cliff Baths, was created to meet the growing demand for bathing treatments in the town, and was accessed directly from the sands of the South Bay.

Above: Drawing of the Turkish Baths (Copyright: Stories From Scarborough)

The baths were later adopted by Jimmy Corrigan, who turned the building into an amusements arcade, with a World of Holograms upstairs. Today the venue is named Coney Island, after the famous New York beach side theme park, but still hosts slot machines and amusements.

But what happened in between these two dramatically different attractions?

Just as the Turkish Baths had appropriated the idea of Turkish bathing, with its spiritual associations, Scarborough’s Indian Village attraction likewise capitalised on the obsession with all things Oriental and Eastern, which permeated the 1800s and early 1900s in particular. The ‘village’ in Scarborough operated during the early 1900s, after the building ceased to operate as a Turkish baths, but before it was taken over by Jimmy Corrigan. It has so far been difficult to establish the exact duration of the attraction.

Above: The Indian Village attraction (from the author’s collection)

Such an attraction would arguably be branded as crude and demeaning today, but back in the early 1900s, the idea of bringing India (albeit a stereotyped and overly simplistic version of the country) to the British seaside was an exciting one for tourists. Or so the then owners believed. In fact, the idealised Indian village – the notion of a primitive feudal settlement – represented for Victorians and Edwardians an antidote to the mechanised bustle of the (then) modern industrial age.

The Indian village has often been seen as the ultimate signifier of “authentic native life”, a place where one could see or observe the “real” India and develop an understanding of the way local people organised their social life.

(source – full reference at the end of the post)

The British Empire saw itself as the height of civilisation, colonising countries and people who were considered primitive and backward. Yet at the same time those of the so-called civilised West harboured romantic visions of many Eastern (and non-European) cultures, seen as exotic, strange, and in many cases, closer to Nature.

Above: This disturbing and demeaning plaque, which commemorates the invention of the Gutenberg printing press, shows Western colonialists ‘civilising’ native people, who are depicted as animal-like and inferior (source)

There were a number of Indian Village attractions across Britain during the late 1800s and early 1900s, and Scarborough’s was typical in terms of the ‘entertainment’ offered. There were “jolly” Indian monkeys, a lion, “sixteen Indians”, native palmists and presumably other cultural appropriations. The lion was supposedly born on coronation day in 1937, a fact regularly advertised in press surrounding the attraction.

Due to the lack of documentation available it is difficult to speculate about the exact nature of the attraction, which sounds patronising and insulting towards the country it claimed to represent, reinforcing the British colonial idea of India as a wild, jungle-like expanse populated by superstitious natives and exotic animals. But this judgement itself is ill-informed, and lacks any concrete supporting evidence. Were there genuine Indian-born performers? Or was this a case of Westerners masquerading as their Eastern counterparts? Were these entertainers well treated? How about the animals? Indeed, Scarborough, like the rest of the UK, was no stranger to entertainment inspired by the far reaches of the British Empire (and beyond), with regular minstrel performances at the theatre(s) and Zulu warrior performances at Gala Land.

You can view an old poster for a minstrel show at Scarborough’s Futurist Theatre here.

Whilst entertainment preferences have long since changed, the desire for holiday snaps has not. They may have lacked camera phones and fancy digital devices, but Edwardian tourists were just as keen as the holidaymakers of today to get their picture taken – and the Indian Village offered a conveniently placed photography establishment, neighbouring the main attraction, where photographs could be taken and developed on the day. Sandwiched between this and the entrance to the village was the intriguingly titled Hall of Laughter. No details on that one. Yet.

On the other side of the attraction visitors could enjoy another tourist staple – waxworks. This small establishment was opened in 1921 by Ernest Gambart Baines, and later taken over by his daughter, a Mrs Dale, and her husband in 1929. Lifelike models of a policeman and fireman stood outside.

Indeed, Scarborough’s Foreshore has always been a lively and varied stretch of road, designed to lure in the tourists. The Indian Village represents a brief moment in this long and diverse history, which frequently references Chinoiserie, and the Victorian/Edwardian obsession (and reduction) of all things Oriental. This applies to Scarborough more broadly, and includes Peasholm Park (with its Chinese and Japanese inspired features), the Hindu-temple inspired aquarium, and ostensibly many more attractions (yet to be uncovered). All join the Turkish Baths and Indian Village in a colourful yet ultimately inaccurate attempt to bring the Far East to a British seaside town.

Do you know anything about the Indian Village attraction in Scarborough? Much of this article is based on guesswork, so it would be helpful to hear from anyone who knows more. Please get in touch if you have any information.