In the heart of Scarborough’s Alexandra Gardens, now a bowling green, Floral Hall once stood. 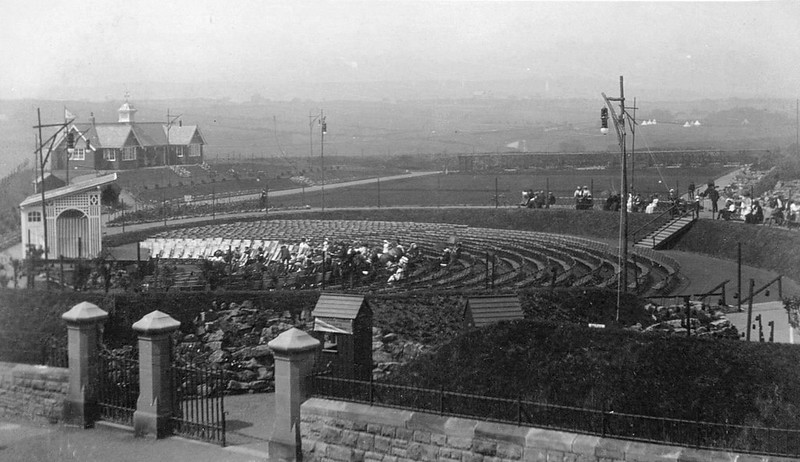 After beginning as an open air home for pierrot performances – then for George Royle’s popular fol-de-rol entertainers, Scarborough’s Floral Hall gained a roof, lost its floral decorations and welcomed a number of big name acts. 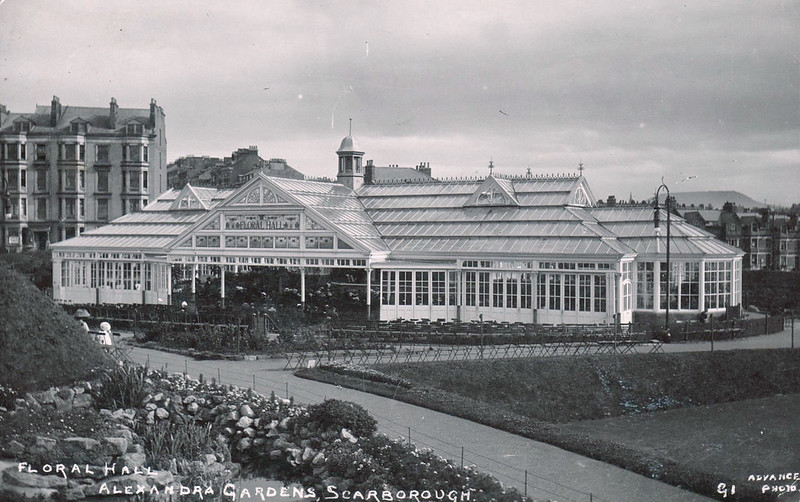 Above: Floral Hall – with roof (source)

This post compares a number of the venue’s programmes from the 1970s, with those from the earliest days. These were the times of the summer season, the variety performance and the triumph of British seaside entertainment. However, the story of Floral Hall begins with pierrots – and Edwardian Scarborough was a good place to be one. 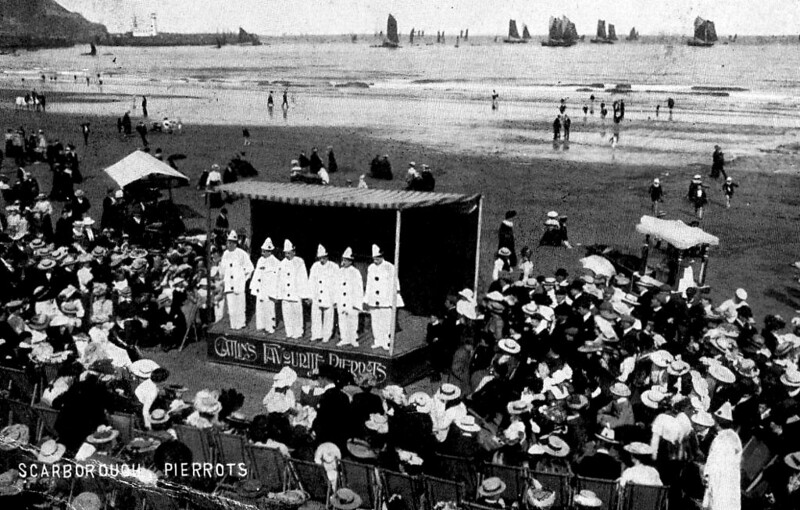 Above: Will Catlin’s pierrots perform on the South Sands (source)

These French and Italian inspired performers dressed in white and performed a mixture of comedy, music and mime, primarily on the beach. Will Catlin’s pierrots were a huge success on Scarborough’s South Sands, as were Carrick’s Original Pierrots. Catlin eventually built the Arcadia on the Foreshore, to showcase these performers, but with the development of cinema, he soon transformed the site into the Palladium Picture House, and the grander theatre that became known as the Futurist. 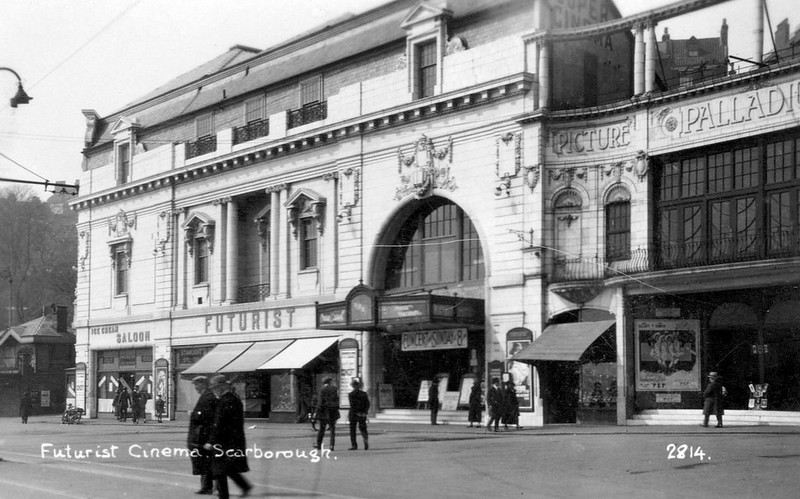 Above: The Futurist and Palladium Picture House (source)

George Royle also led a troupe of pierrots, and when Harry W. Smith – Borough Engineer extraordinaire – set about designing Alexandra Gardens, the open air theatre was to provide a home for Royle’s performers. However, Royle quickly rejected the idea of continuing with the pierrot performances, instead preferring his troupe to dress in eccentric period costumes. Top hats for the men and bonnets and crinoline for the women. Known as the Fol-de-Rols they were Floral Hall’s original resident act. 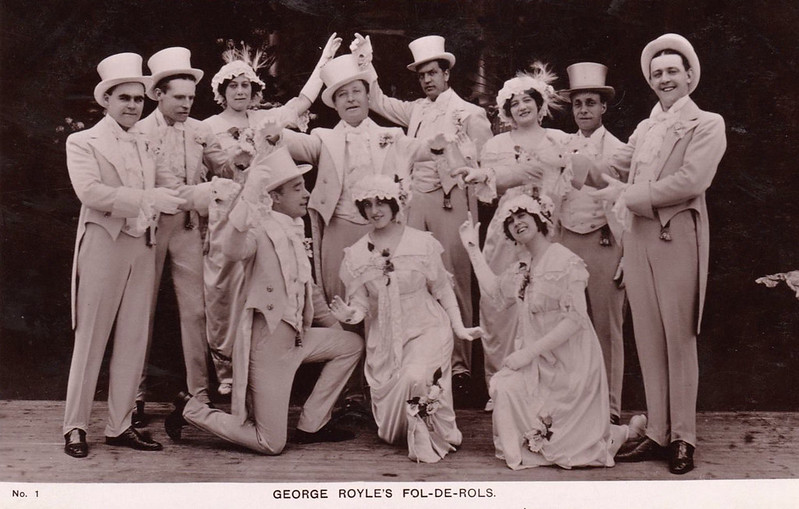 Above: The Fol-de-Rols in the traditional white usually associated with pierrot performances (above)

Below: Looking slightly more like pierrots, the troupe were also known as George Royle’s Imps (source) 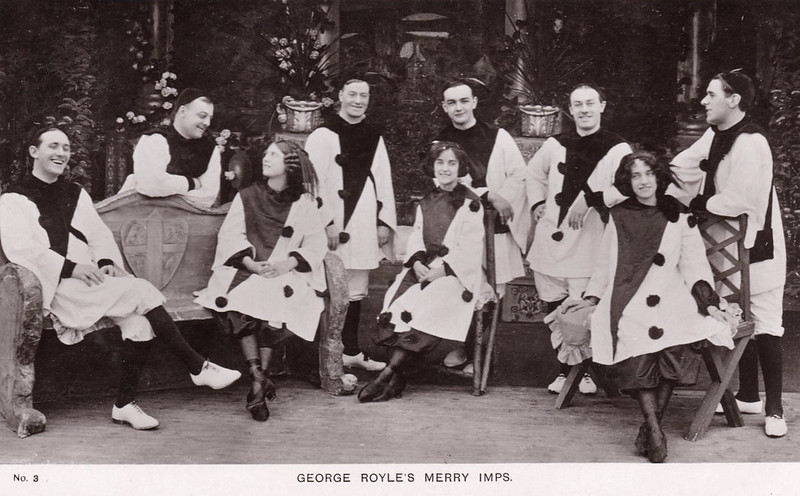 The Fol-de-rols were immensely popular, but WWI changed everything – audiences dwindled (the 1914 Scarborough bombardment was a stark reminder of the dangers of wartime) and George Royle signed up to join the army. When he returned he was invited back to Floral Hall, but rents were rising and tastes were changing – the Fol-de-rols would not return. 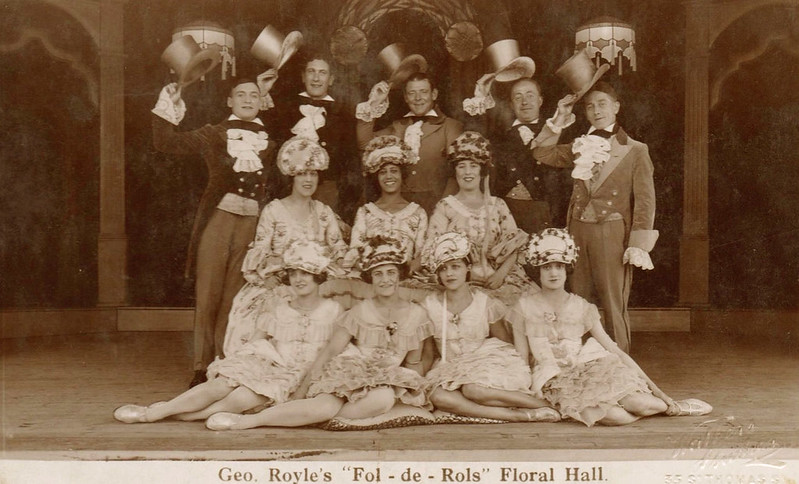 Above: Dresses and top hats (source)

Below: An early programme (source) 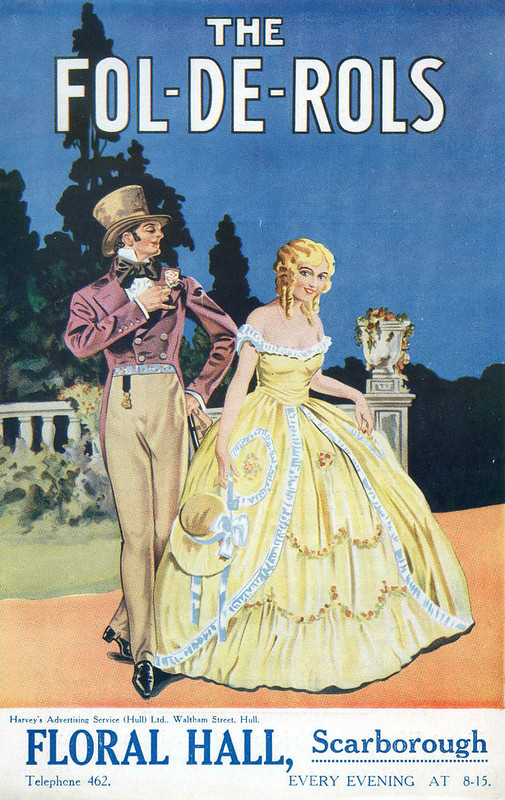 Fast forward to the 1960s and 70s, and seaside entertainment had been completely transformed. Gone were the old fashioned music hall acts, replaced by an altogether more modern form of variety. Furthermore, another huge influence was television – which was where many budding performers made their name. Talent shows such as Opportunity Knocks and New Faces provided many big breaks. Programmes from Floral Hall provide a fascinating insight into the seaside summer circuit at this time, and how stars of the day broke into the entertainment industry. 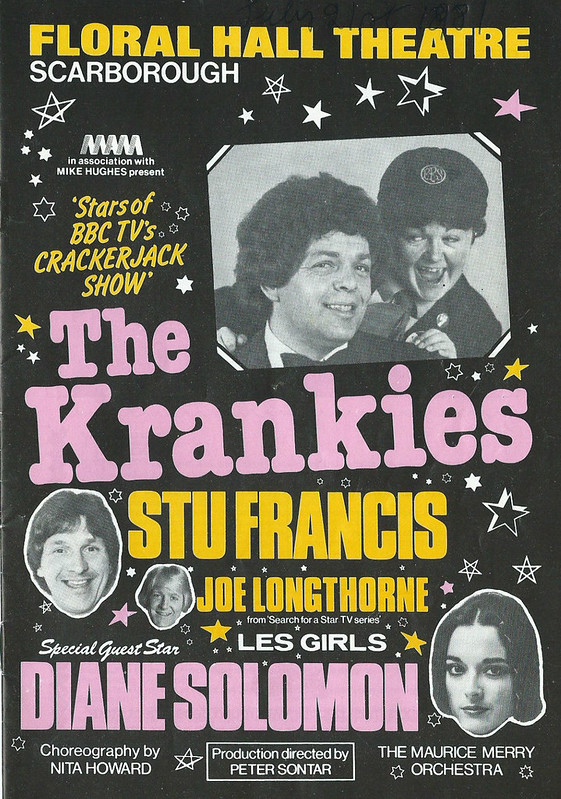 Above: The Krankies – a Floral Hall programme (source)

The Krankies are a Scottish husband and wife duo. They starred in TV’s Crackerjack, amongst other things, and Stu Francis, is another comedian who also featured in the same programme. Joe Longthorne, a singer from nearby Hull, found fame in TV shows such as Junior Showtime, and Search for a Star, while American singer Diane Solomon, made a name for herself on the BBC.

Freddie Starr was another act who was ‘discovered’ on a TV show – Opportunity Knocks. See below: 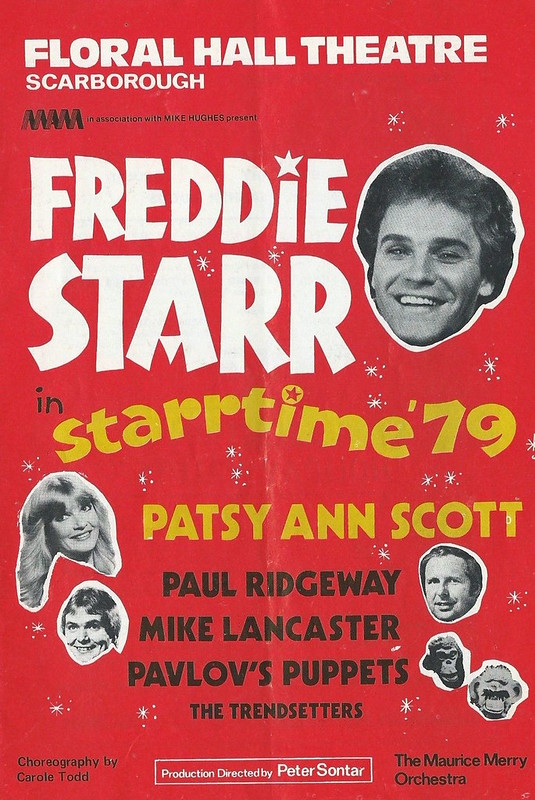 He was joined in Floral Hall for the 1979 summer season by a puppet show, Mike Lancaster (another comedian), and Patsy Ann Scott, known for her appearances on 1970s TV shows. The Maurice Merry Orchestra are mentioned on most of the programmes here, as is the director Peter Sontar. 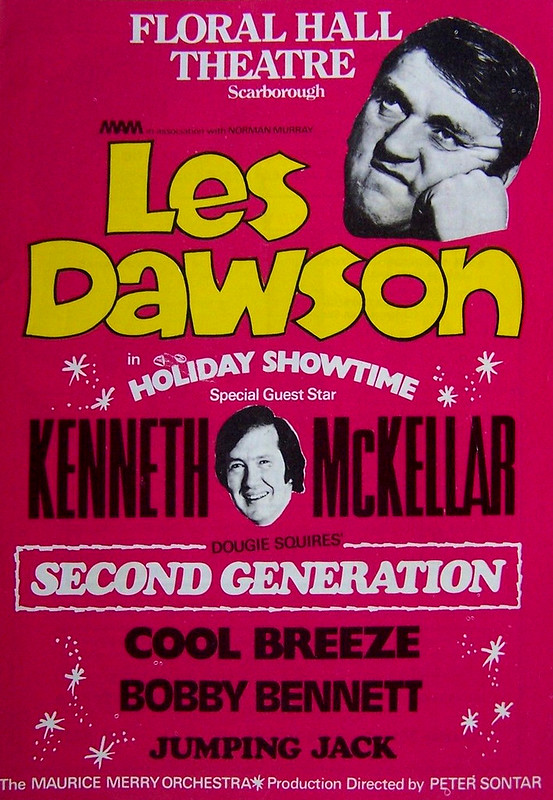 Les Dawson, like Freddie Starr, benefitted hugely from an appearance on TV talent show Opportunity Knocks, and was a comedian famed for his ‘mother-in-law’ jokes and piano playing. Dougie Squires, on the other hand, was a contemporary version of George Royle or Will Catlin. Instead of leading a troupe of pierrots, he created a singing and dancing group called The Young Generation, who were TV regulars in the 1960s and 1970s. Second Generation was an ill-fated attempt to reform the group.  As for Bobby Bennett, he presented Junior Showtime, another TV show with strong Floral Hall connections. Finally, Kenneth McKellar was/is a singer who represented Britain in the Eurovision Song Contest in the 1960s, and made numerous television appearances. 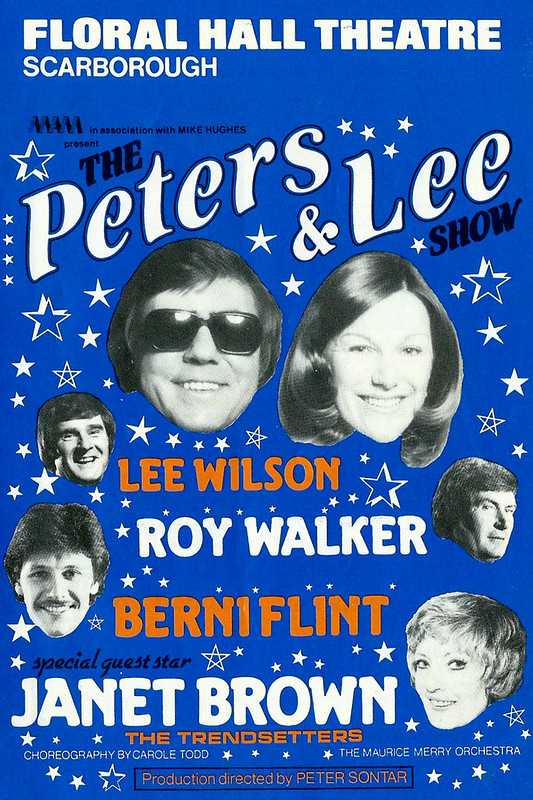 1970s folk duo Peters & Lee were Opportunity Knocks alumni – indeed, Floral Hall seemed to recruit heavily from TV talent contests, and featured in the Royal Variety Performance of 1973. Roy Walker is today perhaps best known as the former presenter of Catchphrase, the popular long-running TV gameshow. but he started off as a comedian, and yet another TV talent show alumni – New Faces this time. Lee Wilson was also a comedian and another former New Faces contestant. Singer-songwriter Berni Flint had a record number of wins in Opportunity Knocks, whereas Janet Brown was an actress and impressionist famed for her impressions of Margaret Thatcher. 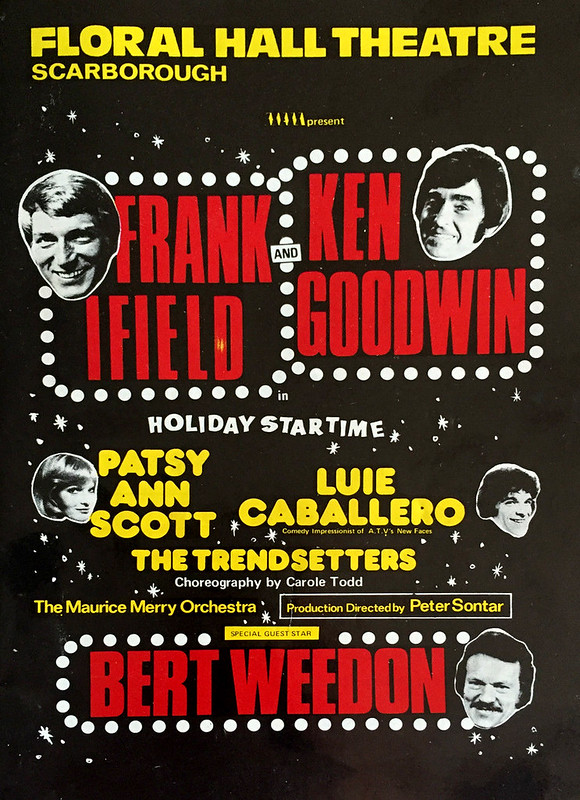 In this final programme, Frank Ifield – a singer who represented the UK in the Eurovision Song Contest. He came a respectable second in 1962, during the decade that made him famous, but in 1976 he was less successful and finished twelfth. Opportunity Knocks gave Floral Hall another performer in Mancunian comedian Ken Goodwin, and Luie Caballero is/was an actor and impressionist. Bert Weedon was a guitarist and a regular performer for the BBC.

As the above selection of programmes demonstrates, Floral Hall hosted an impressive array of performers for nearly eighty years, but sadly closed in 1987 – there were insufficient funds to restore the building, and the heyday of the British seaside holiday was slowly slipping away.

Who would have thought that a simple open air theatre from 1908 would last so long and provide so much entertainment? 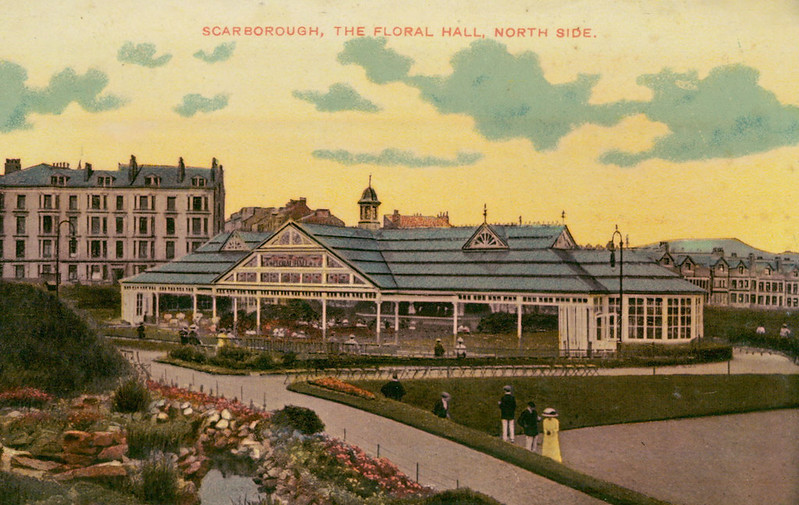 Above: The sun sets on Floral Hall (source)

Do you remember Floral Hall? Do you have any old programmes, or recall the performers you saw?