On July 10th, 1869, the Penny Illustrated Paper describes the opening of:

…a splendid promenade pier on the North Sands…which commands the whole of the rugged and bold scenery of the castle headland, hitherto unseen, except from the water…

Apparently Scarborough’s then new North Bay Promenade Pier, designed by Eugenius Birch, attracted scores of excursionists by rail, who were treated to two grand military prom concerts in the afternoon and evening. 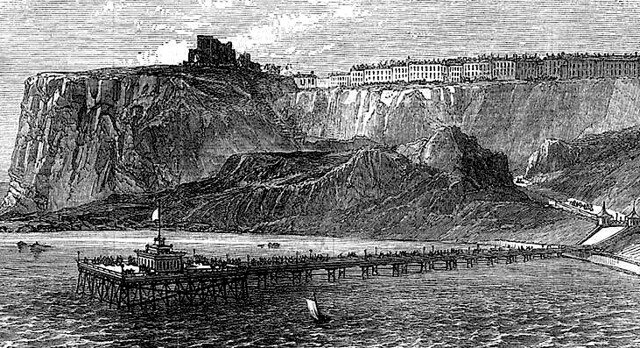 In the British Newspaper Archive, it’s possible to find a number of flattering accounts of the pier – its elegant design, splendid views and the excitement surrounding its early years of operation. 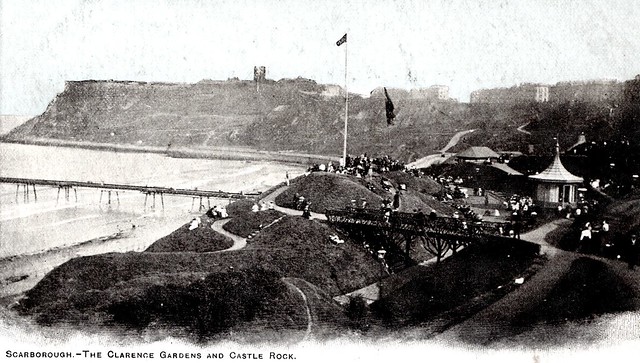 Above: The pier can be seen in the distance, to the left of Clarence Gardens (source)

Nearly forty years later, however, the pier became popular for a very differenct kind of reason, as described in the London Daily News on January 9th, 1905.

The beginning of the year had been a time of turmoil for much of Britain, the paper describes a church flooded in Great Yarmouth, sea walls overwhelmed at Cleethorpes and an unusually high water level for the River Thames in London. A huge storm had caused extensive flooding and misery for many across the country. Indeed, the destruction of Scarborough’s pier was not an isolated incident.

The London Daily News describes eight hundred feet of the pier as washed away, having been recently purchased by the Mayor of Scarborough for £3500.

Iron railings on the foreshore were snapped like matchwood and thousands of tons of water were thrown over Marine Drive, pouring down the roadway into the houses in proximity…

Indeed, parts Marine Drive were also severely damaged. The road, designed to connect the two sides of the town via its picturesque coastline, had, in the main part apparently been completed in 1904. However, this and other damages inflicted by stormy weather, delayed the official opening until 1908, to account for repairs being made. 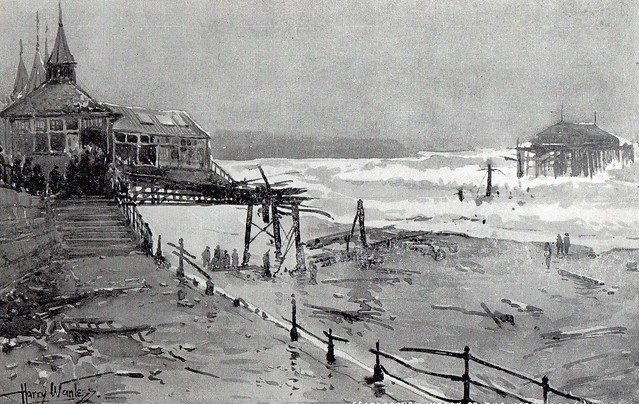 Above: The storm caused widespread destruction beyond the pier (source)

The destruction of the pier had an unintended advantage for Scarborough – crowds flocked to the town to survey the remains of the pier and the damaged section of Marine Drive. Tramcars even carried a sign in their windows to advertise their routes towards the disaster. 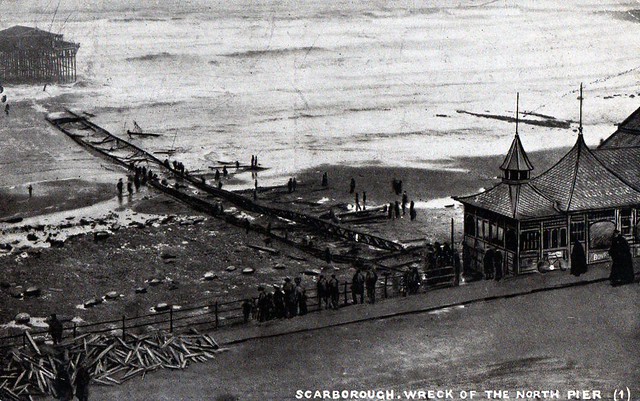 Above: Crowds survey the damage (source)

The story was a less pleasant one for local workers – builders on the Marine Drive project spent their working hours knee deep in water, making the necessary repairs, and presumably, someone had to clear up the wreckage of the damaged pier, all under the curious gaze of onlookers.

Above: Stormy seas at Scarborough (from the author’s collection)

Homeowners too were affected.

Those living close to the site at the time reportedly suffered severe loss. Costs of repairs to homes, Marine Drive and other affected areas were apparently unprecedented within the town, having faced one of the most destructive storms to date.

The pier too, had cost around £250000 to build, although it had struggled commercially for decades. Needless to say, it was not rebuilt.

All of the above information was sourced via newspaper articles from the British Newspaper Archive, located at the British Library in London.