The 1980s was a key time for many of Scarborough’s best loved attractions. In 1984, Scarborough Zoo and Marineland was given a makeover. The animals left and more attention was given to rides and amusements, under the new name of Marvel’s Amusement Park. In the same year the North Bay Bathing Pool received two huge slides (the longest in Europe at the time) and a new name – Waterscene.

Only a year later, Kinderland opened on Burniston Road, and two years later Waterscene became Water Splash World. Across town the South Bay Pool closed in 1988. Scarborough was changing in a bid to keep the tourists coming back.

Please do not copy or use any of these images without permission.

First of all, there are some splendid images from the final years of Scarborough Zoo. 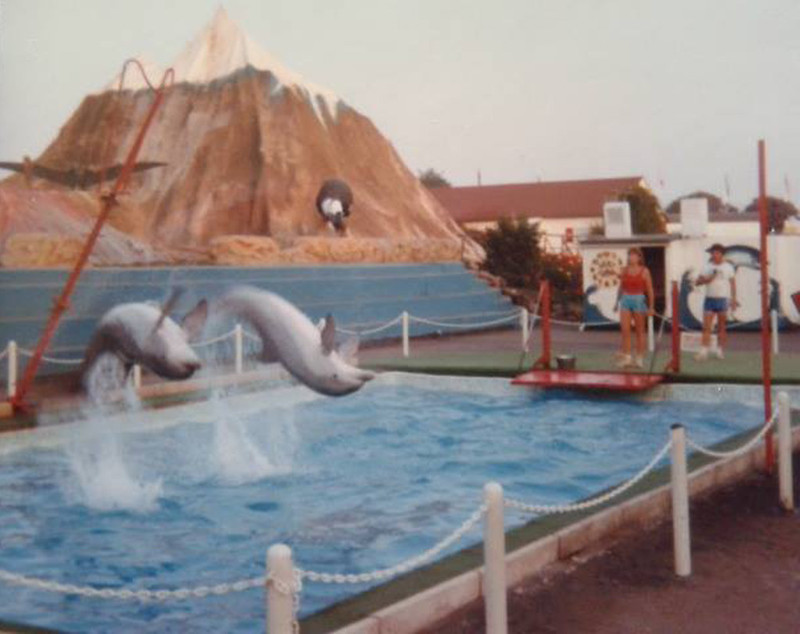 Above you can see the performing dolphins, and below – a bear. There was once a whole host of animals at the zoo, including parrots, snakes, even farmyard animals and huge fibreglass dinosaurs! 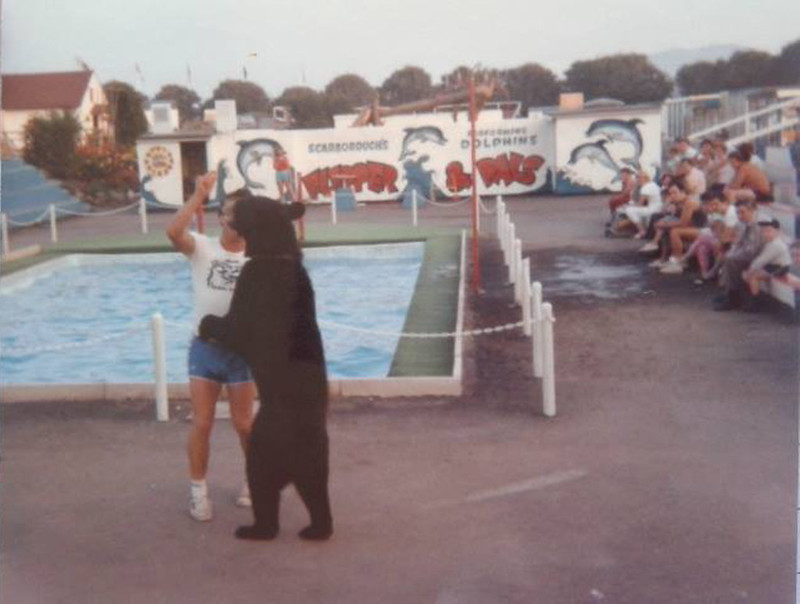 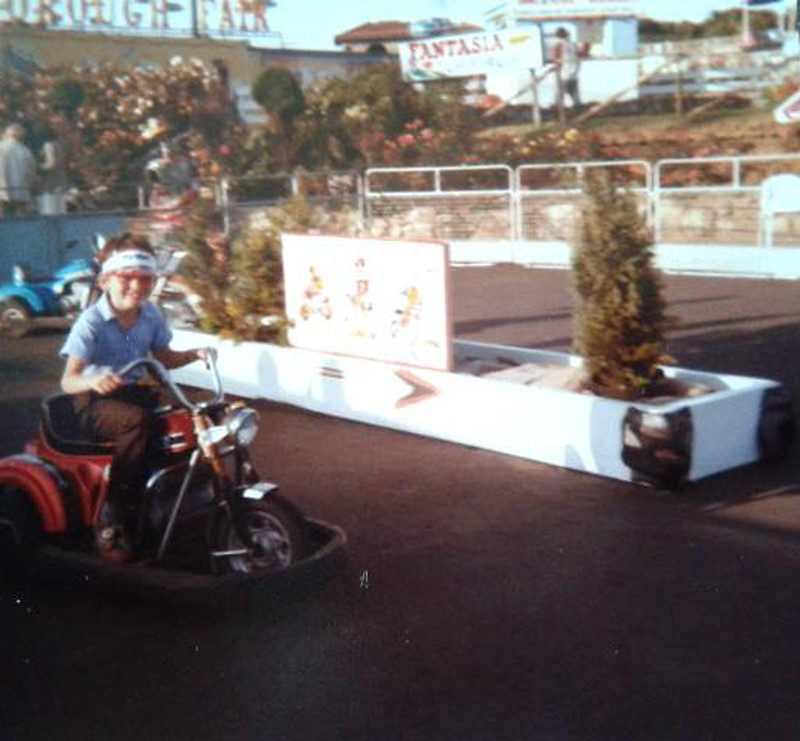 There was also a small racing track (above), and the Astro Slide (below). The latter survived into the Marvel’s era. There was also a larger version at the Scalby Mills Complex, which was built in the 1960s and demolished to make way for the current day Sea Life Centre at the start of the 1990s. 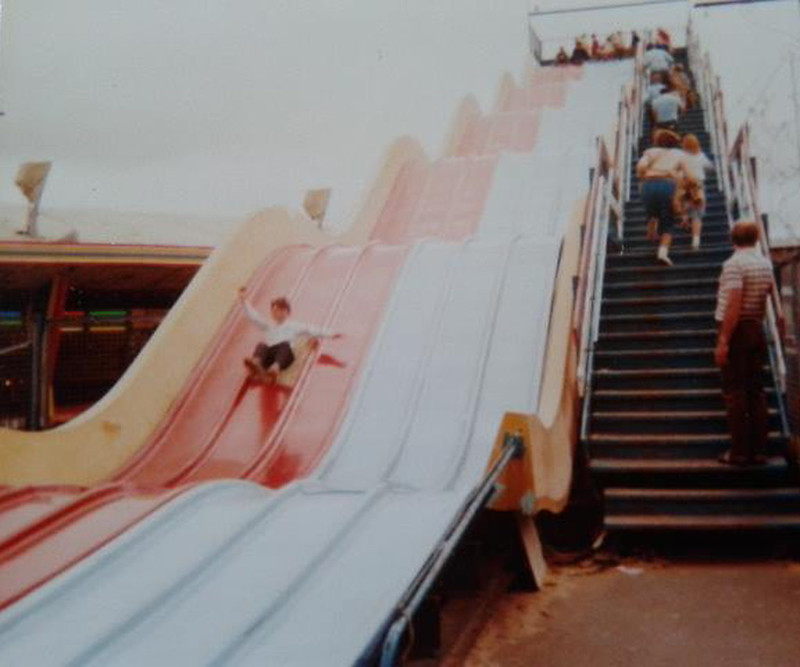 There’s also a lovely shot of the Hispaniola on the Mere. 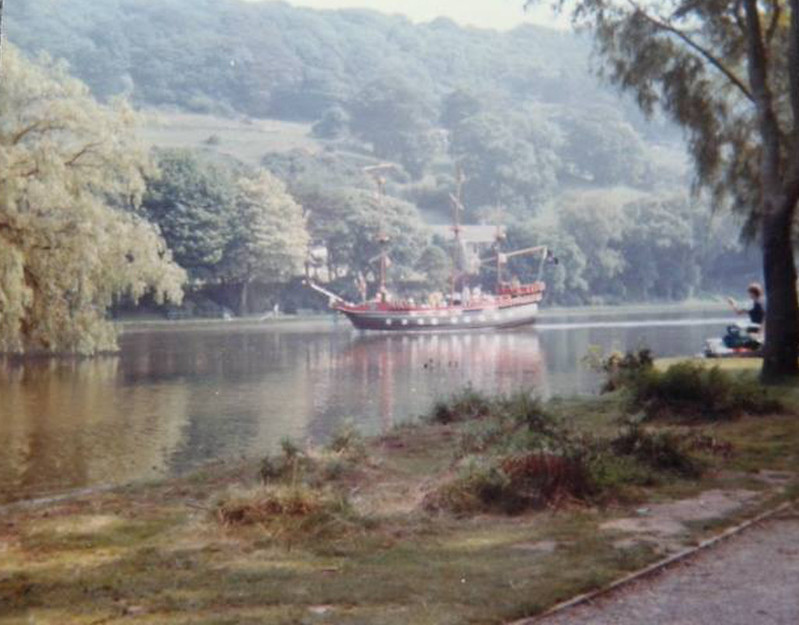 The company that built the Hispaniola back in the 1940s – Charles Pearson Ltd – also constructed many of the miniature boats for the Peasholm Park Naval Battles, which also feature in Simon’s collection. 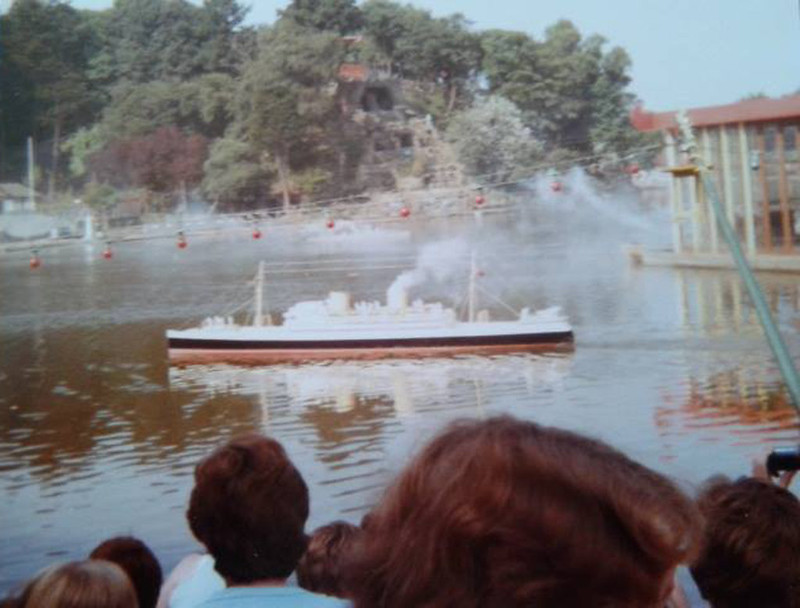 And then of course there’s Kinderland – every visitor remembers the Muddlebugs (pedal cars), and how difficult to steer they were. 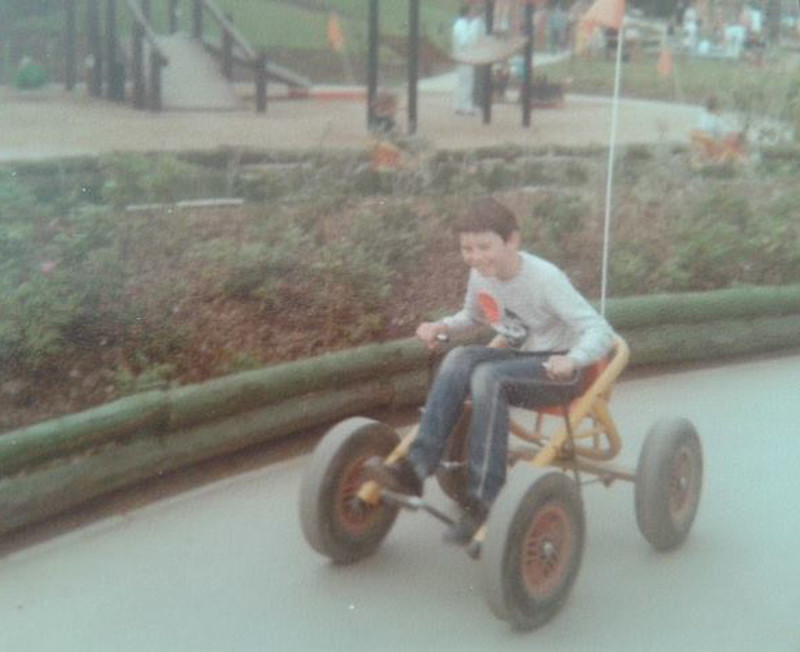 A huge thank you to Simon for sending these in. You can see more on the Image Archive website.

Do you have any photographs of the attractions listed on this website? Your images could really help both the archive and the research – often small details in a picture can lead to new avenues of investigation. If you’d like to donate images, please get in touch. Modern day images also welcome (e.g. photographs of the Hispaniola today, the derelict Marvel’s site, water chute etc) as too are opinions of the sites. Do you like the new developments? Or should the original attractions be restored?

This is the fifth in a series of posts summarising some of the lesser known, and sometimes unexpected facts behind Scarborough’s former attractions. The others include the following:

Scarborough Aquarium: Did You Know…?

Gala Land: Did You Know…?

The Hispaniola: Did You Know…?

Scarborough Zoo: Did You Know…?

This post is about Kinderland, the children’s activity park that operated on Burniston Road, Scarborough between 1985 and 2007. To read more about it, please see the links on the Places page.

Did you know that…

1) Kinderland is a German word

Kinder translates as ‘children’ and land means ‘country’ in German. Indeed a number of childrens’ attractions in Germany, past and present, been named Kinderland, as have attractions elsewhere – even in the US. Founder Dudley Wallis was reportedly discouraged from using a German name for his play park, but did so nonetheless.

Above: Camp Kinderland in the US has a long history (source)

One of the more famous uses of the Kinderland name includes Camp Kinderland – a camp based in Tolland, Massachusetts, and originally founded by a Jewish organisation based in New York. It was formed in 1923 as an escape for children living in the grim tenement buildings of the city, and was the feature of a recent documentary – Commie Camp.

2) The park was inspired by its German equivalent(s)

However, it was not the famous Camp Kinderland that inspired Dudley Wallis, but in fact a park in Munich, Germany – also called Kinderland.

Above: Munich Airport has a Kinderland, but this is too modern to be Wallis’ inspiration (source)

After his holiday camp (the Wallis Holiday Camp at nearby Cayton Bay) closed, Dudley Wallis was able to spend more time relaxing – this included watching television, and it was a feature on a German camp (called Kinderland) that formed part of his early inspiration for the park.

I sat around with nothing specific to do in the morning

As mentioned above, the best known Kinderland in Munich now seems to be a play area at the city’s main airport. Perhaps Wallis meant the Kinderland resort in Bavaria?

The Kinderland Company operates a range of leisure parks, holiday accommodation sites and attractions in Bavaria. Perhaps it was an early version of this organisation that Dudley Wallis saw on television? Either way, Kinderland(s) across the world seem to feature holidays, play and often the great outdoors. Scarborough’s Kinderland was no different, and certainly had a holiday camp feel to it, with the timber huts, neat fences and tidy landscaped grounds, surrounded by trees and greenery.

3) The park was not initially welcomed

As mentioned in this post – many in Scarborough did not want Kinderland, fearing a rowdy amusement park brimming with slot machines, lights and loud music. Yet Dudley Wallis did not want any of these things either – Kinderland boasted a distinct lack of slot machines, music and anything garish or obtrusive. His adventure playground was very much in keeping with its surroundings – it encouraged exercise, games and good old-fashioned outdoor play for children, whilst also providing a cafe and plenty of seating areas for parents.

Above: Kinderland postcard (from the author’s collection)

Interestingly, following resistance to the park in the 1980s, Scarborough fought to keep Kinderland when it faced closure in the early 2000s, and the attraction also won an award in the late 1980s.

Dudley Wallis’ dream took £700,000 to realise – the land had to be converted, the playground built, the materials bought and then there was the staff the run it. Although Kinderland enjoyed a successful opening weekend and became a popular draw for coach trippers, visitors tailed off, and whilst the park remained well-liked and attended, custom was insufficient to meet the costs, and as early as 1989 losses were reported.

One of Kinderland’s most popular attractions was its fleet of pedal cars – humorously named Muddlebugs. Notoriously difficult but enjoyable to operate, the cars required the rider to co-ordinate pedalling with hand operated steering around a carefully marked ‘racing track’. With their bulbous wheels and wonky gears these vehicles were far from Grand Prix material, but there were often queues for a ride and children are certainly competitive mini-racers!

Above: Muddlebugs similar to those used at Kinderland (source)

Of course Muddlebugs were never specific to Kinderland, and can still be found at selected children’s leisure parks, both in the UK and abroad. When the park closed, many of its rides and structures were put up for sale, so parts of the attraction could still be entertaining children somewhere to this day. Perhaps.

Housed inside a large wooden hut was an extensive indoor play area featuring plastic tunnels, slides, firemen’s poles, and a ball pool. Known as ‘the swimming pool’, it was popular with visitors, many of whom reportedly mentioned in their letters of appreciation to the park’s founder Dudley Wallis.

Above: Postcard depicting the ball pool – top right (from the author’s collection)

Shoes were left outside the play area, so that worn socks could navigate brightly coloured tunnels, stumbling past padded beams and netting, which separated the different parts of the indoor complex.

7) The site was formerly used as allotments

Kinderland, like Atlantis, Marvel’s, Manor Gardens and Peasholm Park, was once part of the epic Northstead Estate, which was eventually sold to the Scarborough Corporation during the early twentieth century. However, whilst much of the area was converted into entertainment spaces, the Kinderland site avoided this fate until the 1980s, although the water chute and boating lake long pre-dated it, being part of the original Northstead Manor Gardens, which were constructed in the 1930s.

Not far from the army barracks on Burniston Road, the Kinderland site was used for more leisurely activities, namely the growing of plants by local residents. Before that, the area was part of a network of fields and farmland, possibly used for crops or grazing livestock.

Currently the site remains in limbo – Kinderland is gone (although the water chute and boating lake continue to survive), and the overgrown site lies empty, awaiting redevelopment according to the most recent reports. Several sources mention proposed holiday chateaus – maybe Kinderland will continue to entertain children in the distant future, or perhaps its days as ‘the children’s world’ are gone forever.

For further sources see other Kinderland posts and also this article from the July 1985 Glasgow Herald.