Scarborough’s North Bay Railway is one of the town’s most enduring and well-loved attractions.  Passengers can board the train at either Northstead Manor Gardens (the stop, however is called ‘Peasholm‘, after nearby Peasholm Park) or Scalby Mills, and take a scenic ride through park, along the seafront and back again. 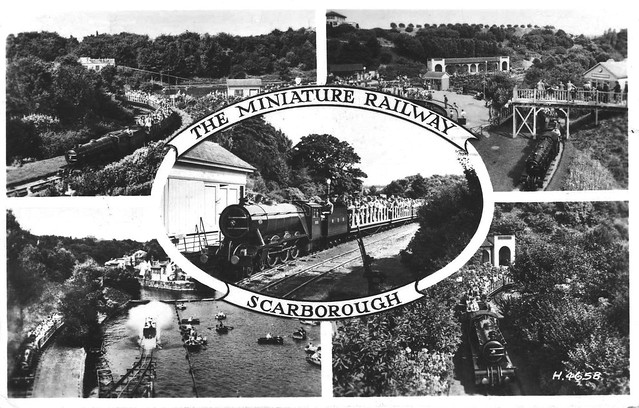 Above: The North Bay Railway (source)

The railway opened in 1931, as part of the brand new Northstead Manor Gardens (Pleasure Gardens), which would eventually include a water chute, open air theatre and boating lake. The gardens were the brainchild of Harry W Smith, a prolific engineer who designed many of the town’s most successful tourist attractions. However, the miniature railway proposals met with a mixed reception from locals, gaining the nickname ‘the Borough Engineer’s Toy’. 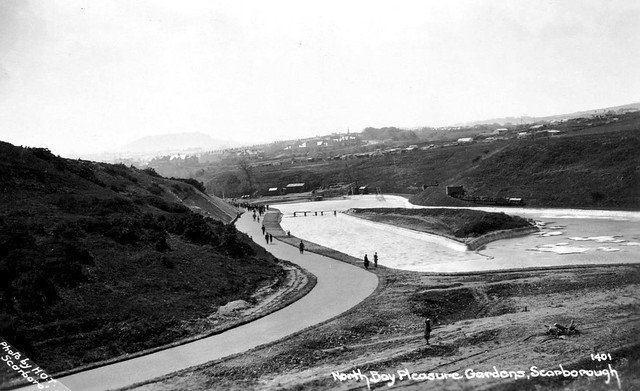 Above: From the early development of Northstead Manor Gardens at Hodgson’s Slack (source)

At 2pm, Saturday May 23, 1931, the railway began taking passengers. As with all of Scarborough’s opening ceremonies of this era, the occasion was a grand one, with the presentation of artefacts to the driver (see below). Neptune was the name of the original locomotive, and Alderman Whitehead, presiding over the occasion, made the following solemn decree:

“On behalf of the National Union of Drivers, Engineers and others, I have to present you, the first driver of the North Bay Railway Engine, with your insignia of office, your oil can and your ‘sweat rag’.”

Neptune is the oldest engine, having begun its service in 1931. Triton and Robin Hood followed only a year after, and in 1933, Poseidon. The first two locomotives are still owned by Scarborough Council (then the Scarborough Corporation), with the remaining two owned by the operators (North Bay Railway Company), to whom Triton and Neptune are leased. 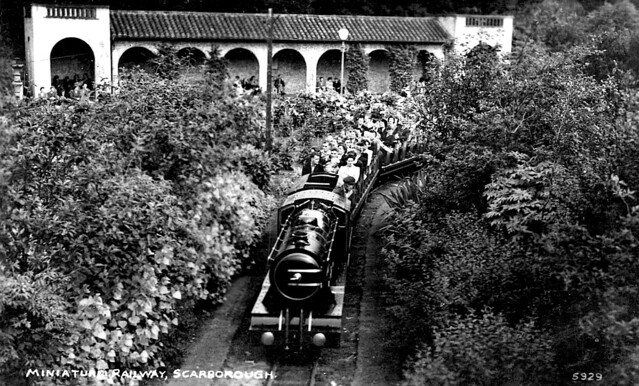 Above: The train setting off from Peasholm station (source)

A number of companies were involved with the construction of the trains and carriages, including Robert Hudson Ltd (Leeds), Hudswell Clark, Slingsby and Armstrong and subsequent additions and restorative work completed by Rail Restorations North East Limited, of Shildon. The original carriages have undergone much restoration to ensure their survival to the present day. Furthermore, the Patent Enamel Company provided the station boards whilst advertising boards and posters were provided by LNER (London and North Eastern Railway). 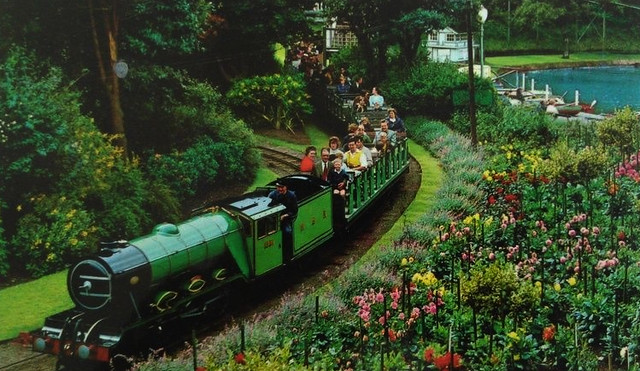 However, after only a year of operation disaster struck. In 1932, 10 July, a collision occurred at the now disused Beach station, overlooking the North Bay.

Driver Herbert Carr, only 25, lost his life, and numerous passengers were injured. Thankfully when a similar accident occurred in 1948, everyone survived and injuries were minimal.

On July 6, 1940, the attraction closed until Easter 1945. WWII no doubt led many to fear a repeat of the bombardment that occurred during WWI, and securing coastal defences took priority over the running of the railway. Interestingly enough, the small tunnel in Manor Gardens gained a new function – as a place for the Royal Naval School of Music to store their musical instruments whilst operating from the nearby Norbreck Hotel. 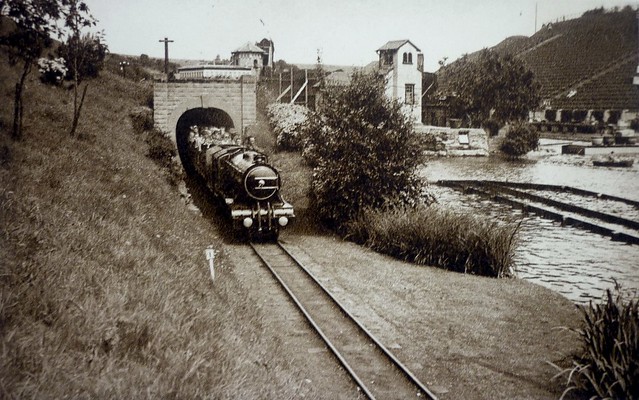 Above: The tunnel at Northstead Manor Gardens (source)

The railway was acquired from Scarborough Council in 2007 by the North Bay Railway Company, who also now operate the Water Chute, Boating Lake, Sky Trail and more. Thanks to their continuing hard work, the miniature railway still delights passengers today, and aspiring train drivers can even book a session at the controls. 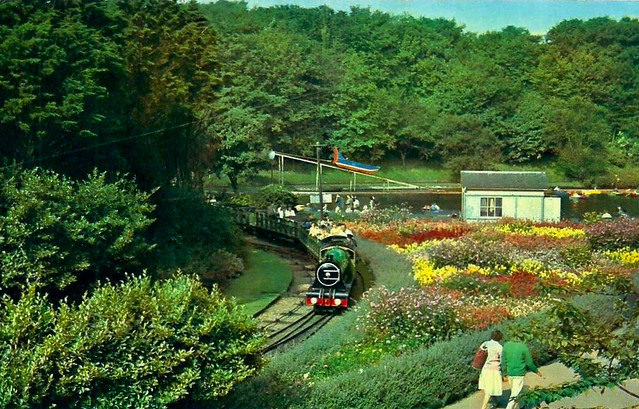 Above: The train and the water chute in the background (source)

There are plenty of stories to be told about the railway – any memories are very welcome, as are corrections, additional details and so on.

A short history of the North Bay Railway

In-depth history of the attraction here

When the North Bay Bathing Pool opened in the summer of 1938, Scarborough’s North Bay was rapidly becoming a haven for holidaymakers.

Above: The North Bay Pool was also known as Scarborough Children’s Lake (source)

Across the road was the relatively new Peasholm Park, initially developed in 1912. Around the corner was a miniature railway, water chute and open air theatre, all part of the new Northstead Manor Gardens, or Pleasure Park, as it was then otherwise known.

Above: The early days of Northstead Manor Gardens (from the author’s collection)

However, only a few decades earlier, this patch of land had looked very different indeed, nor was it even ‘officially’ part of Scarborough. Part of it was purchased by the Scarborough Corporation in 1911 for the development of Peasholm Park, and the remainder of the estate was bought by the same organisation in 1921. Prior to these transactions, Scarborough legally ‘ended’ at Peasholm Beck.

There were no adventure playgrounds or water slides here – the land was used for more practical matters before the twentieth century arrived. Piggeries, allotments, farming – thick boggy mud and hard work. All of this seems an antithesis for what was to follow.

Above: 1913 Northstead, in blue, before it became part of Scarborough, in pink (source)

The area in which the North Bay Bathing Pool later stood was known as Rawling’s Field. Located next to Tucker’s Field (which later became Peasholm Park), the site belonged to a Mr Rawling. A reader kindly contacted Stories From Scarborough to clarify this further:

This was a piece of land owned by my great grandfather’s brother – George Blackett Rawling (1853-1916) – who owned and managed the bathing machines on the North Bay in the late 1800’s and early 1900’s.  He sold the land to the then Scarborough Corporation for a few shillings (I understand).

Many thanks to Phil for getting in touch with this information, and also for sending an old newspaper article outlining the origins of the pool.

Rawling’s Field and Tucker’s Field once formed part of the sprawling Northstead Estate.

Above: Tucker’s Field, shortly before being developed into Peasholm Park began (source)

The origins of the estate are somewhat murky – some sources suggest that the area was originally named Hatterboard; the Northstead moniker emerging much later. Local friars gained permission to build a priory in the area in 1245, and the land was bestowed upon a series of noblemen before being purchased by King Richard III in the fifteenth century.King Richard reputedly favoured Scarborough and was the last known monarch to stay in the town’s castle.

Above: The earliest known portrait of Richard III (source)

At the centre of the Northstead estate stood a manor house, although few accounts describe it in any great detail:

At the beginning of Elizabeth’s reign ‘the Northstead’ had a ‘parliour,’ an old chamber reached by wooden stairs, and ‘a lowe house under it’ unfit for habitation; Sir Richard Cholmley’s shepherd dwelt in it until it fell down. Adjoining were an old decayed barn and the walls of other houses, which shortly afterwards fell, and an old chapel. Sir Richard Cholmley, lessee of Edward VI, used the timber of these decayed buildings to build ‘an hall house, adjoining it to the said parliour.’

A survey in 1650 did not record a manor house, with earlier reports suggesting that it may have fallen into disrepair. However, in spite of the lack of historical records, the construction of Peasholm Park in 1911 did reveal the remains of medieval buildings of a domestic nature, although little conclusive information could be deducted about their purpose or significance. These ruins were found in the centre of today’s Peasholm Lake.

Above: The lake at Peasholm Park (source)

Although the manor house disappeared long ago, the accompanying position – Stewardship of the Manor (of Northstead) remains an official one, bestowed upon MPs to relieve them of their duties.

Above: A plaque in Peasholm Park acknowledges the stewardship (source)

Northstead has indeed witnessed many transformations; from its early days as a medieval estate to its later manifestations as a magnet for seaside holidaymakers. Peasholm Park in particular is a lasting legacy of the latter, although its early neighbours – the North Bay Bathing Pool and the attractions located in and around the Northstead Manor Gardens, have endured mixed fortunes.

Above: The North Bay Bathing Pool at night (source)

The opening of the North Bay Bathing Pool in 1938, for instance,  was reputedly a grand affair – with a band and underwater lighting. Likewise its transformation into Waterscene in 1984, featured a visit from holiday camp legend Fred Pontin. The succession of glitzy rebrandings was followed by closure in 2007. As the site fell into disrepair, and the bright blue slides faded, a return to the boggy fields of old was no longer so unlikely. However, the birth of the Military Adventure Park continued the evolution of the area, and new investment (including the redevelopment of the old outdoor theatre, and the updating carried out by the North Bay Railway company) is preserving what was once little more than a muddy field for generations of holidaymakers to come.

It has been difficult to verify some of the information in this post – if you know anything more about Northstead’s history, or have any thoughts or corrections, please comment below.