One of Kinderland’s best loved features was the Water Chute. 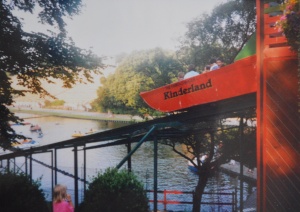 Above: The Kinderland Water Chute (from the author’s personal collection)

Passengers boarded this boat-shaped vessel and were swiftly transported, via tracks, down to the nearby boating lake in Northstead Manor Gardens.

Above: The former Kinderland boating lake – the Water Chute tracks are just on the left behind the trees (source)

The descent ended with a huge splash, and the ride was completely free for Kinderland ticket holders.

Above: Another view of the Water Chute (source)

Although the Water Chute was acquired by Kinderland when the activity park opened in 1985 – the chute itself had existed since 1932, operating independently for over 50 years. 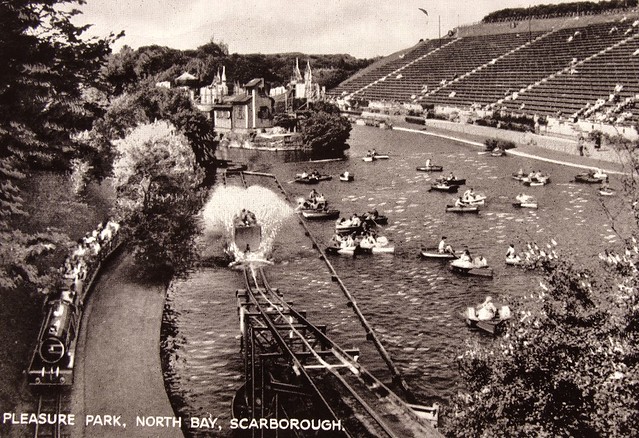 Above: An early postcard featuring the Water Chute (source)

The earliest water chutes were developed during the early twentieth century, and by the 1920s were making their way into fairs and parks across the UK.

Above: An early Water Chute in Southport (from the author’s collection)

Blackpool, Southport, Southend-on-Sea all had one, and North Yorkshire was no exception, with chutes opening in both Hull and Scarborough. The design is often attributed to Charles Wicksteed, who founded Wicksteed Park in Kettering. This park also, unsurprisingly, features a Water Chute – one of the first to be built and one of only a few still in operation today.

Above: The Water Chute at Wicksteed Park – very similar to the one in Scarborough (source)

In 1928 construction of the Water Chute in Northstead Manor Gardens (also known as Scarborough Pleasure Park) began, taking four years to complete and eventually opening alongside the nearby Open Air Theatre in 1932.

Above: Water Chute (centre), Open Air Theatre (background) and the miniature railway on the left (source)

One year earlier, the miniature railway had transported its first passengers past the Water Chute site, then under construction.

Above: The early days of the North Bay Railway (source)

Northstead Manor Gardens, which also featured a boating lake, was built on Hobson’s Slack – the geography of the area was ideal for an amphitheatre. The Open Air Theatre has been recently redeveloped following its closure between 1986 and 2010. It has since hosted a range of big name acts including Status Quo and JLS.

The Water Chute has also benefited from recent regeneration in the Manor Gardens area. Having suffered vandalism and disrepair following the closure of former operator Kinderland in 2007, the attraction was restored and reopened in 2008 with funding from The Sands redevelopment project. It is now owned by North Bay Railway.

Whilst advances in engineering and design have since produced ever more complex and thrilling water rides, there is still something to be said for the simple pleasure of the original Water Chute experience. Indeed, its endurance as an attraction (for over 80 years!) is testament to this fact.

Have you taken a ride on the Water Chute? Do you remember it being part of Kinderland? Are there any mistakes in this post? Please comment below.