Scarborough was once a treasure trove of theatrical venues. Scarborough Opera House opened on St. Thomas Street in 1876, the Spa Theatre in 1879 and there was also live entertainment at the Aquarium, which opened in 1877.

Scarborough’s oldest theatre was the Theatre Royal, which opened in 1771, and there were many more not mentioned here, since demolished and/or redeveloped.

Some, like the Futurist (1920) and the Palladium Picture House (1912) served first as cinemas before accommodating live entertainment, and the outdoor performance space in Alexandra Gardens (1908) proved so popular that a roof was added, later becoming a full-blown theatre that could accommodate visitors during all weather conditions.

You can read more about Scarborough’s many former theatres by visiting this link.

The Open Air Theatre in Northstead Manor Gardens, however, was a little different. Once described as ‘The Drury Lane of the open air’, there was no protection here from the unpredictable British weather. It opened in 1932, and performances took place on a stage that was in fact located on an island in the middle of the lake at the centre of the gardens. This was truly an ambitious and exciting project for Scarborough… 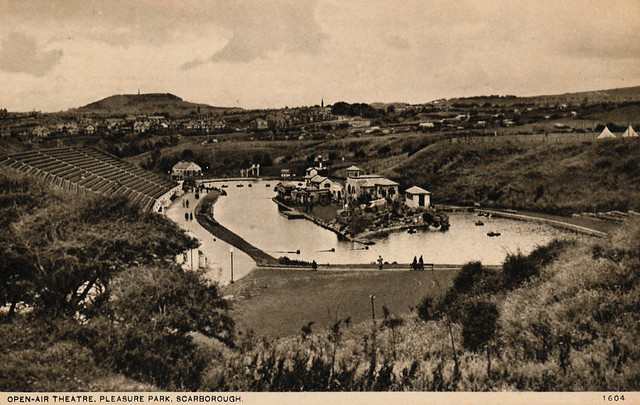 Above: The Open Air Theatre (source)

The site in question was purchased by the Scarborough Corporation in 1926, to be developed into pleasure gardens, which would include a water chute, boating lake and miniature railway line. Known locally as Hodgson’s Slack, this natural ampitheatre offered an ideal setting for live entertainment, and would eventually accommodate as many as eight thousand audience members. For sell-out performances some would even sit on the nearby grassy banks, when seating proved insufficient to meet demand. 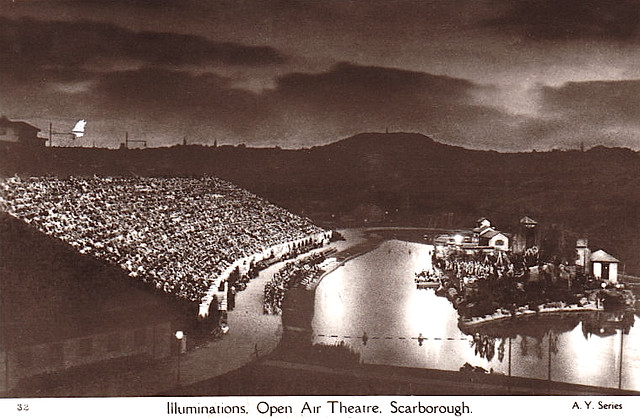 Above: From the opening night (source)

The first performance was a grand affair, opened by the Lord Mayor of London in the summer of 1932. He reportedly said:

The setting is ideal and constitutes a wonderful tribute to the imagination of whoever realised the possibilities to be derived from this particular park of the park, and also to the engineers who carried out the necessary embellishments and alterations which provide such a picturesque stage and background and also such splendid accommodation.

Merrie England, a well-known light opera penned by Sir Edward German, was the first production to be performed at the theatre, and one of many ambitious performances by Scarborough Amateur Operatic Society over the following decades. First performed in London, in 1902, the story is set during the reign of Queen Elizabeth I. 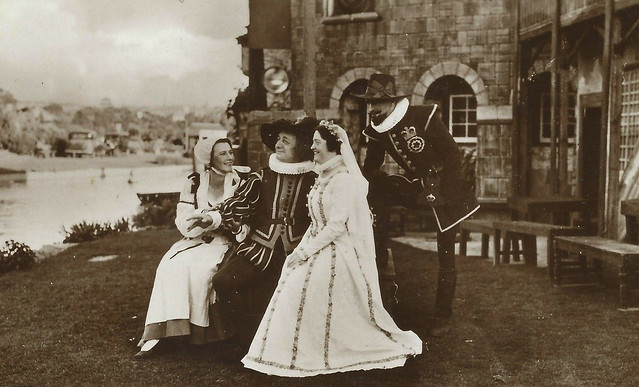 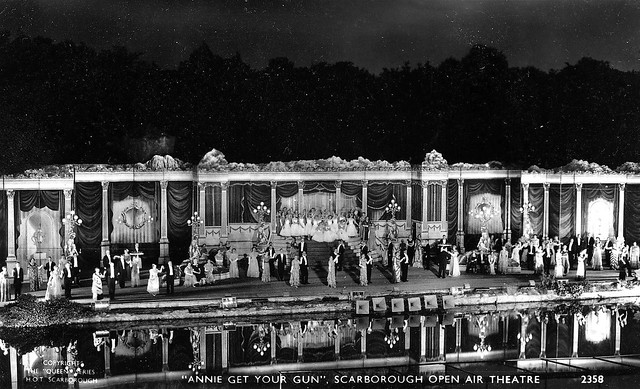 Above: Annie Get Your Gun (source) 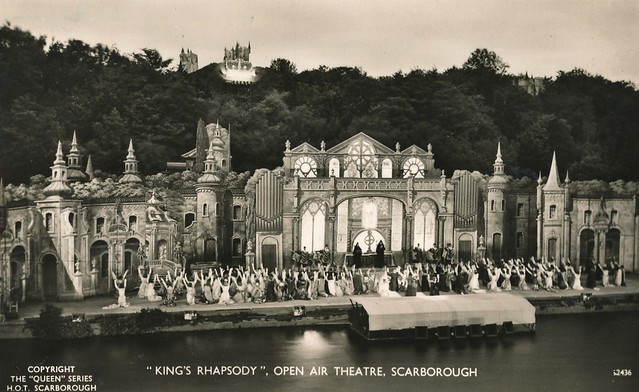 In the 1950s It’s a Knockout became a popular addition to the theatre’s repertoire, continuing well after the last musical – West Side Story – was staged in 1968. The latter featured Hi-di-Hi actress Ruth Madoc in a starring role. Nine years later the dressing rooms and much of the scenery buildings on the island were removed, as was the seating, and, following the complete closure of the venue in 1986, the remaining structures fell into gradual decay. 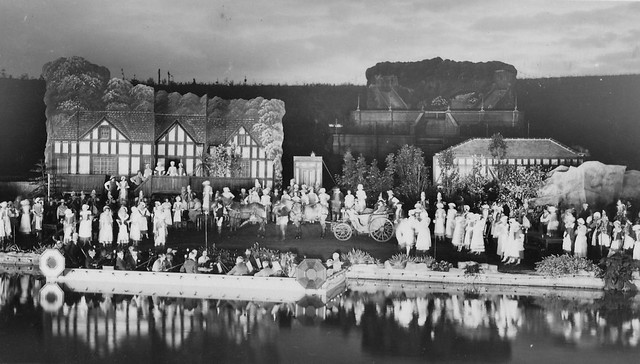 Above: The theatre during its heyday (source)

In 2008, the go-ahead was received for a major redevelopment, and in 2010 the rejuvinated theatre was re-opened by the Queen. With a slightly reduced seating capacity of 6, 500, the venue has hosted, to date, a range of different acts, including Boyzone, Tom Jones and Elaine Paige in 2015, as well as community events in the past and even televised showings of England World Cup Matches in 2010, via a large screen.

You can see a list of upcoming events here.

Have you ever been to the Open Air Theatre? How do old and new compare? See any mistakes in the history above? If so please comment or get in touch. For more pictures and memories see the Facebook Page.

A brief history of the theatre