As previously mentioned here on the website, Peasholm Park, the North Bay Bathing Pool, and much of the surrounding land, were once all part of the large Northstead Estate. 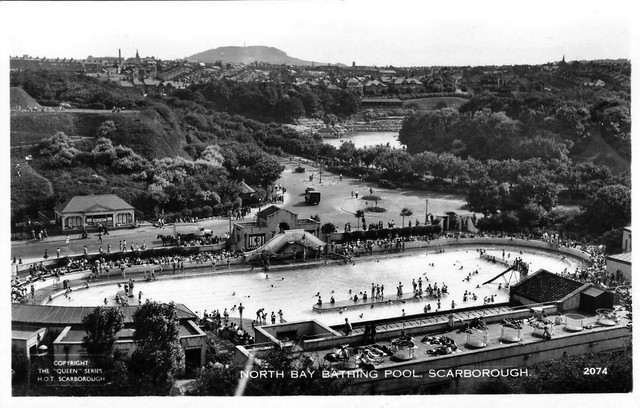 The roads, landscaped gardens and footpaths of today were once fields accommodating livestock.

One – upon which the North Bay Bathing Pool was later built – was known as Rawling’s Field. You can read more about it here, including an account by Mr Rawling’s great grandson.

The other, where Peasholm Park now stands, was referred to as Tucker’s Field. Andrew, great grandson of Mr Tucker himself, was kind enough to share some more details about this area’s pre-Peasholm Park history:

A little about peasholm Park and Tuckers field. My Great grandfather John Tucker of Tennyson avenue used to rent the land known as Tuckers field . He kept livestock and chickens there . Also family stories tell that he used to charge people to ice skate on the lake that formed in the winter when he dammed the small stream. There is a link here to a report about a theft from his land in 1907 which predates SBC buying the land .

The story describes two men –  Thomas E Luntley and Joseph Lindsay – being charged with stealing six ‘fowls’ from Mr Tucker. Luntley denied theft but admitted helping to take the birds away, apparently being drunk at the time.

Lindsay too blamed intoxication for his actions.

The report also includes a testament by an Inspector Henderson, who describes finding one of the hens concealed under a mattress at Lindsay’s house on Dumple Street, another having been taken away to Quay Street. The remaining birds were apparently thrown into the sea.

According to this source, Dumple Street, where Lindsay lived, historically suffered from a somewhat dubious reputation.

Both of the accused had already accrued multiple convictions in the past, and for their crime were sentenced to several months of hard labour.

…the opportunity to steal livestock would not remain for long – only a few years later the construction of Peasholm Park would transform Tucker’s Field, after the Scarborough Corporation purchased the land.

Above: Peasholm Park (from the author’s collection)

Indeed, Scarborough’s landscape has experienced such incredible transformations across the decades – the buying, selling and renting of land; the building, demolishing or abandoning of attraction structures – imagine all the stories that still lie hidden…

Also many thanks to Andrew for sharing this story.