In the summer of 1969 a brand new attraction opened in Scarborough. 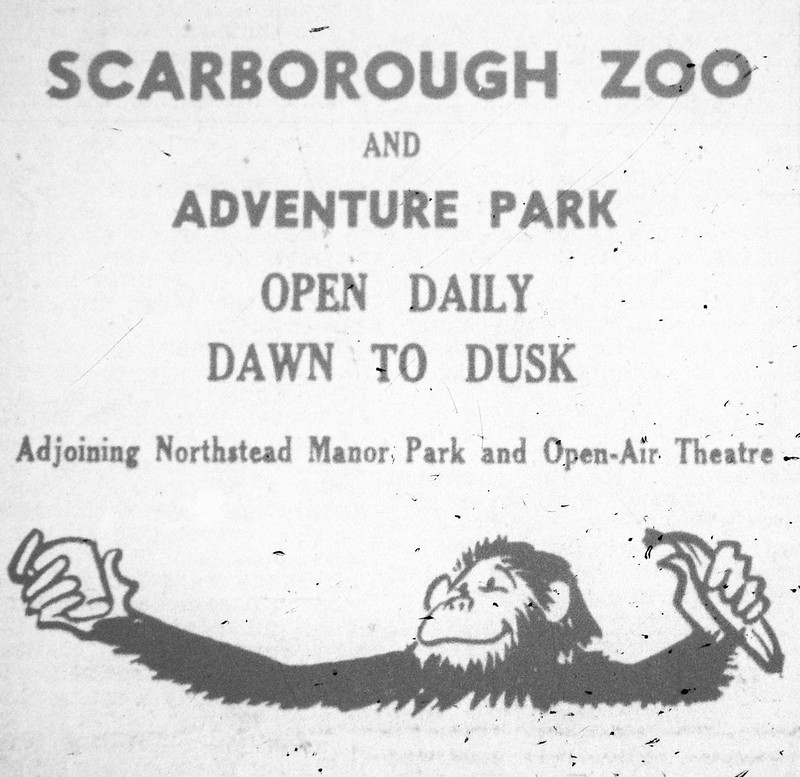 Above: One of the earliest adverts for Scarborough Zoo (Stories From Scarborough Image Archive)

Scarborough Zoo was located on the top of the hill behind the Open Air Theatre seating area, and was accessible by a road opposite the miniature railway station in Northstead Manor Gardens. Previously known as Tennis Court Road, this path had once led to little-used tennis courts, utilised occasionally by schoolchildren completing their cycling proficiency tests. The courts were widely regarded as a white elephant, and unsurprisingly council officials reportedly welcomed the Scarborough Zoo redevelopment plans – the man behind them, Don Robinson, promised a mini-Disneyland for Scarborough.

Construction began at the end of 1968. However, the June opening in 1969 was beset with all kinds of unusual problems.

Scarborough Zoo hit the news before the attraction had even opened. Sammy the sea-lion; one of the park’s new imports, made a daring escape into the North Sea, evading capture for several weeks.

A 3 year-old girl from Rotherham fell twenty feet from a thirty five foot slide in the recently opened park, ahead of the official opening the following Saturday. Fortunately young Jane West was not seriously injured, although a visit to nearby Scarborough Hospital was necessary. However, Don Robinson was quick to point out that the safety of the slide was not in question:

In one playground in Holland last year more than a million children used one of these slides without one accident. They have been using these big slides there for a long time.

He also emphasised that parents and riders needed to use the slide responsibly.

In actual fact, what happened yesterday was that the girl went down on her father’s lap. That is how she came to fall off. I would not blame the father: he was understandably very upset. It was just unlucky. The slide is not designed for children to go down on their parents’ laps.

Following the incident a notice was erected advising slide riders to adopt suitable sitting positions for their downward journeys. It is difficult to imagine an incident like this today occurring without an accompanying lawsuit by the parents of the injured party.

Only days before the official opening of Scarborough Zoo, one of its soon-to-be residents died before even arriving at the park. An unnamed dolphin from Miami, US, died whilst travelling from London to Scarborough. The unfortunate animal’s American trainer, Jon Keller, noted that the dolphin’s condition had been considerably weakened by high altitudes experienced during the Transatlantic flight. Hoping to draw attention away from the tragedy (and any negative feeling towards the zoo this might have incurred), Don Robinson was quick to point out the favourable condition of a second dolphin who had also made the same journey.

Within three or four minutes of being put in the pool he was feeding out of his trainer’s hand and Mr Keller thought this was very unusual as they usually take several hours to become established in strange surroundings.

Times have changed considerably since these distant days. It is now more widely recognised that animals have complex needs, and that captivity can cause distress and ill health.

Above: A performing dolphin at the zoo (from the author’s personal collection)

Unfortunate events may have given Scarborough Zoo some bad press, but perhaps it was better than no press at all. The opening of the zoo seemed, according to a study of local newspapers in May/June 1969, to be overshadowed by coverage and anticipation of the summer carnival in Scarborough. Then known as the Benelux Festival, this colourful event celebrated flowers, Scarborough and the town’s relationship with Belgium, the Netherlands and Luxembourg.

Nonetheless, Scarborough Zoo officially opened on Saturday June 14th 1969 (although judging from earlier articles some visitors had been admitted in the preceding week also) Alongside the Mayor, Mayoress and selected officials, 400 excited children from nearby Northstead School got the chance to be amongst the first ‘official’ visitors to the attraction. Mr Robinson’s son had attended the school, prompting its special selection.

In spite of everything, Scarborough Zoo and Marineland was a long-running success. Even after the animals moved out in the 1980s, a rebranding as an amusement park (known as Marvel’s) in 1984 ensured nearly two further decades of business for the attraction, which eventually closed in 2002. Mr Robinson’s ‘mini-Disneyland’ is little more than a memory today, but if you look closely at the overgrown wasteland of modern times, there are hints of the former attraction hiding behind weeds and broken glass.

Did you ever visit Scarborough Zoo? Do you remember the sea lions or the dolphins? Perhaps you rode the slide that Jane West fell from? Please share your stories or get in touch.

All of the research in this post comes from old editions of local newspapers held at the Scarborough Room in Scarborough Library.