Between 1898 and 1907, a tall, rotating, observation tower stood on Scarborough’s North Cliff, not far from the town’s iconic castle. It was known as Warwick’s Tower. 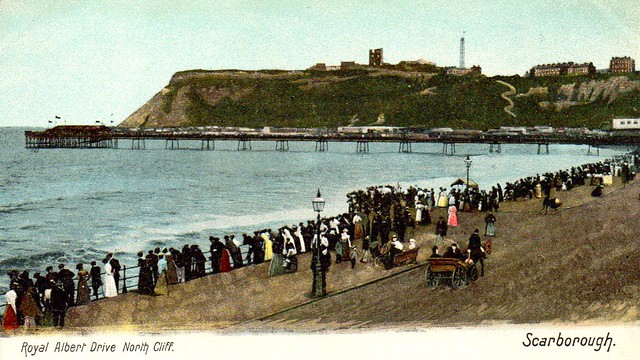 Above: A view of the tower from Albert Drive, including the pier and the castle (source)

Revolving towers were a quirky fad of the late 1800s and early 1900s. A number of Britain’s most popular seaside towns had their own, with an observation deck and views of the nearby landscape. Morecambe, Great Yarmouth, Scarborough and others, eager to capitalise on the British seaside holiday boom, sought new and exciting attractions with which to tempt eager holidaymakers.

But where did the idea of a revolving tower come from?

The idea was originally conceived in Atlantic City, New Jersey, the U.S., where the first structure of this nature was created. American engineers and inventors sought out bigger and better ways to transport visitors into the sky, from ferris wheels at fairs and beaches to skyscrapers in cities.

Above: An early example of the rotating tower

It was within this climate of ambition and adrenaline, that a Methodist preacher called Jesse Lake invented the revolving observation tower, after developing a fascination with machinery during his youth. Once built, the structure at Atlantic City was steel framed and 125 feet tall, with a pavilion below for amusements, games, exhibitions and waxworks.

However, Lake never patented his design.

In the late 1800s enterprising Englishman Thomas Warwick travelled to the U.S and came back with an American wife, and a burning ambition to reproduce Lake’s ambitious revolving tower. A London engineer by trade, Warwick cannily patented the revolving observation tower in 1894, ensuring that his company would be the sole provider of these strange structures across the country. The design was based on a moving platform, powered by a mixture of steam and weights, and raised via a steel cable.

Above: Great Yarmouth’s tower – which proved to be the longest-running and most successful

Great Yarmouth pioneered the British version in 1897, closely followed by Morecambe and Scarborough 1898. The towers rose 150 feet over the landscape and accommodated 200 visitors at a time.

Above: The view from Great Yarmouth’s tower

The towers encountered mixed fortunes – following the initial novelty, the Douglas Tower was destroyed by fire in 1900, only a year after opening. The Morecambe version was taken down when Warwick’s company folded in 1902, whereas Scarborough’s version struggled on for several more years.

Above: There was also a revolving tower at Cleethorpes

Great Yarmouth, the first revolving tower in the U.K., also proved to be the most resilient, with a local business formed specially to save it. It lasted until 1941, in spite of being plagued with faults during the interwar years. During WWI, regulations meant that the tower unable to operate after dark, leading to a loss of profits.

Above: The tower at Cleethorpes was converted into a ride

Before the tower at Cleethorpes succumbed to demolition, it was converted into a ride. Passenger cars, shaped like boats, where attached to the moving platform with chains, and operated as a fairground ride of sorts. But what about Scarborough’s tower?

Above: A view of the tower from Clarence Gardens, shortly before its demolition (source)

Warwick’s creation attracted controversy in Scarborough from the beginning – although initially popular it was soon deemed an eyesore, and fell into disrepair after Warwick’s company was dissolved in 1902. Finally one man – Alfred Shuttleworth – actively financed the demolition process, which began in 1906 and was finally completed by 1907, shortly after the nearby pier (which also experienced mixed fortunes) was destroyed by a storm in 1905.

Indeed, the seaside attraction business was, and still is, a ruthless one…