Piers were once built solely as functional structures, enabling access to boats for passengers and cargo. The idea of a so-called ‘pleasure pier’ is a relatively recent one, emerging in the 19th century alongside the rising popularity of the British seaside holiday. Not only did the pleasure pier enable tourists to enjoy proximity to the sea, but these interesting structures often featured amusements and theatrical entertainment, as well as benches from which the fresh air and seaside ambience could be enjoyed.

For Scarborough, building a pier on the South Side (construction began in 1863) was largely a practical endeavour, linked to harbour activities.

Ideas for a pier on the North Side, however, represented recreational possibilities. Before the days of Marine Drive, Peasholm Park and the North Bay Bathing Pool, this part of Scarborough was, compared to the South Side, far less developed. Nonetheless, the idea of a pier close to the North Bay was presumably a way of capitalising on Scarborough’s expanding tourist empire and a complementary addition to the sea view offered by nearby Clarence Gardens. 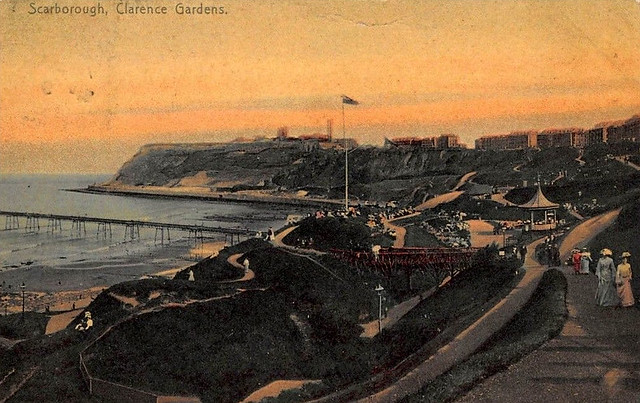 Above: The pier as viewed from Clarence Gardens (source)

Construction began in 1866. The structure was designed by Britain’s foremost seaside architect, Eugenius Birch, who also designed the town’s new aquarium, this opened over a decade later, in 1877.

Birch is now renowned for designing, amongst other things, Brighton Aquarium and piers at Blackpool, Hastings, Margate and more.

Compared to more elaborate affairs in Brighton and Blackpool, for instance, Scarborough’s North Bay Pier was a small, simple structure. Reports suggest that visitors were unwilling to pay to use it in significant numbers, nor were they particularly eager to venture out over the choppy waters of the North Sea. The venture was not a commercial success. 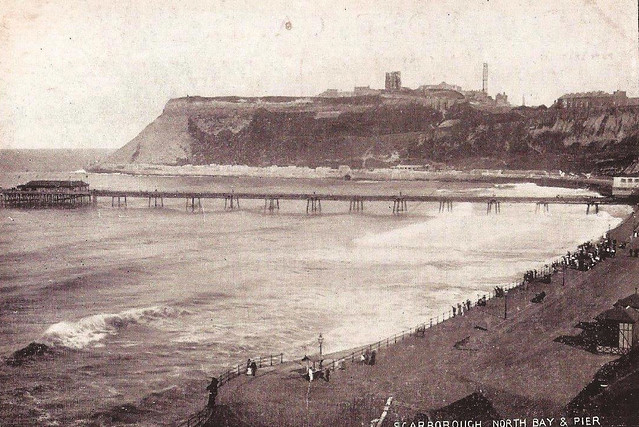 Above: Another view of the pier (source)

In January 1905, a tremendous gale destroyed it. Large crowds gathered to view the desolate aftermath, which left the end of the pier severed from the shore – a lonely building at the mercy of the waves. 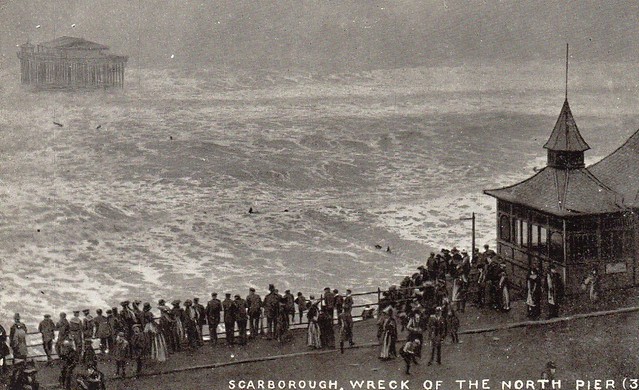 The structure was never rebuilt. 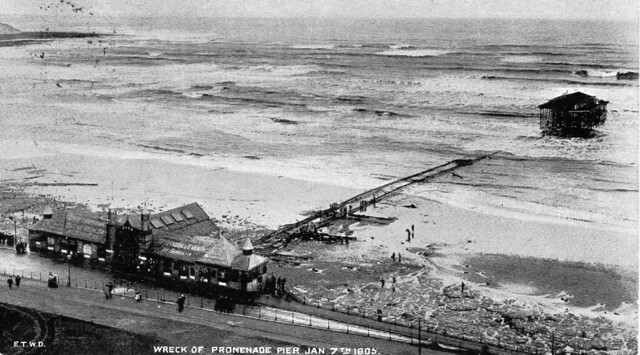 Above: The remains of the structure in 1905 (source)

Visitors to the Stories From Scarborough Facebook Page have noted that it’s still possible to see the foundations of the pier during low tide.

Have you ever spotted them?

8 thoughts on “The Tragic Tale of the North Bay Pier”