Beyond the Spa and the South Bay bathing huts in Scarborough, is a large expanse of concrete. Now a star map, it covers what was once the South Bay Bathing Pool, one of the town’s most popular attractions. 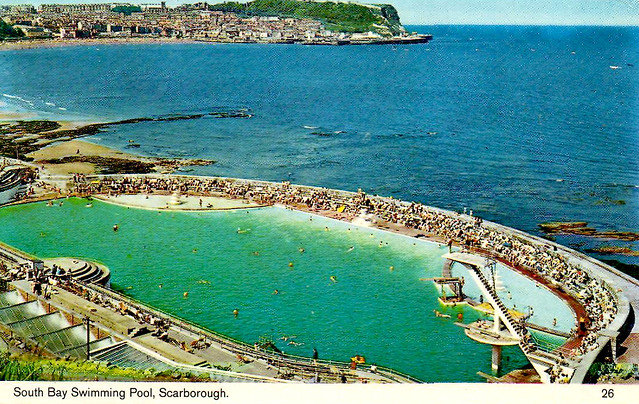 Above: The South Bay Pool (source)

The pool was one of many masterpieces designed by Scarborough’s former Borough Engineer, Harry W. Smith, who was responsible for Peasholm Park, Floral Hall and Northstead Manor Gardens, to name just a few of the attractions that came to define his glittering career. Under his guidance much of the town was transformed into a haven for tourists, and his legacy can still be seen across Scarborough today. 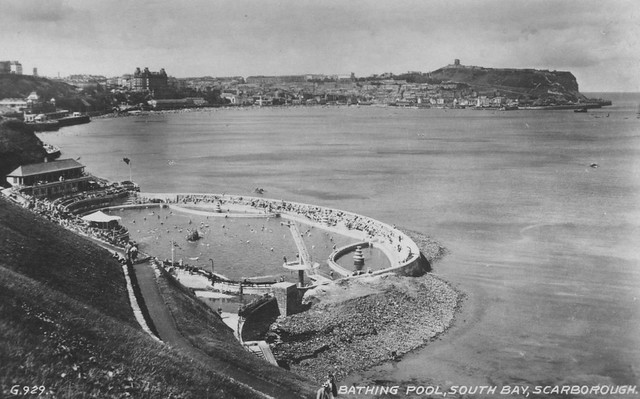 Above: The pool was part of a large scale redevelopment of the area beyond the Spa (source)

Harry W. Smith apparently thought of the idea – for an outdoor pool – after a visit to Guernsey, which already had an open air tidal pool for bathers. The pool he proposed would be the first of its kind in Britain, and would include diving boards, water chute, different depths, changing rooms and showers etc. This would exceed existing seaside provision for bathers, which was rather meagre – the North Bay Bathing Pool would not be built until the 1930s and those who wanted to swim often headed for the sea, accompanied by a cumbersome bathing machine. 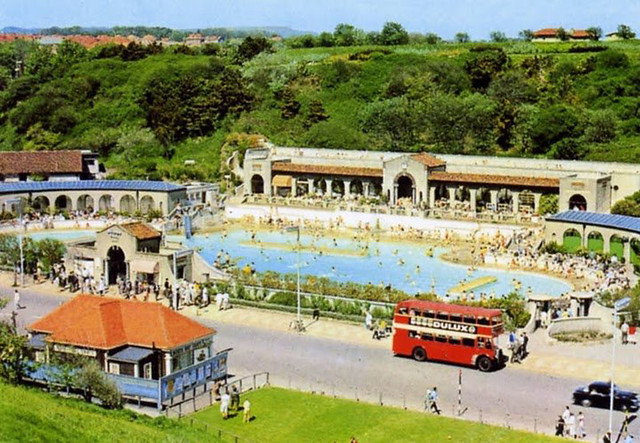 Above: The North Bay Pool did not open until the 1930s (source)

Construction began shortly before the outbreak of WWI, and was taking place in December 1914, when Scarborough was bombarded by German ships. Workers were able to shelter, coincidentally, behind the new wall they had recently constructed for the pool. 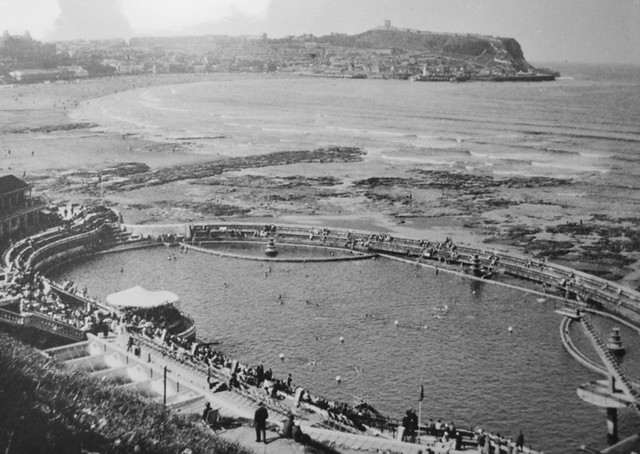 Above: The early days of the South Bay Pool (source)

The pool was part of a larger development including the Clock Cafe, gardens, cliffside paths and beach bungalows that had enjoyed such popularity when they were introduced along the North Sands earlier in 1910. This newly developed area in the south, just beyond the Spa, helped accommodate the growing crowds of holidaymakers, and the pool in particular was vast. Built in the Art Deco style, it measured 330ft long and 167 ft wide, and was filled naturally by fresh sea water, propelled into the pool by the tide each day. Officially opened in 1915, the pool later hosted national competitions, such as the Amateur Swimming Association championships, and provided a training ground for more serious swimmers, some of whom would go on to swim the Channel – more on this to come in a future post! 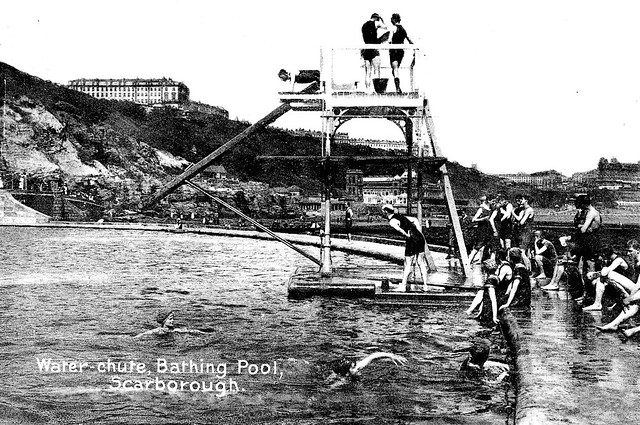 Above: One of the original diving boards at the pool (source)

It has also been reported that the pool may have been designed in such a way as to protect against coastal erosion . Either way, it provided a picturesque, family friendly spot, where visitors of all ages – bathers and non-bathers, could enjoy themselves. 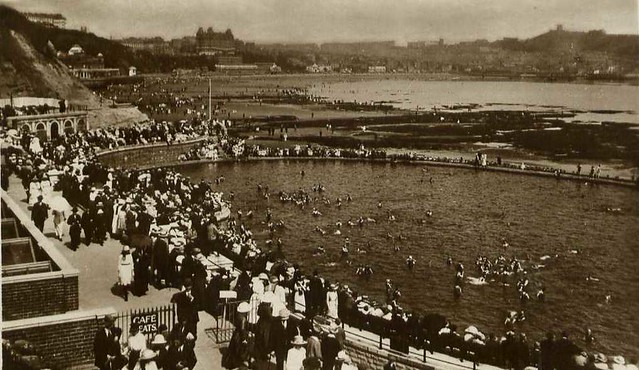 Above: Many visitors simply came to admire the displays of swimming and diving (source)

In 1935, due to popular demand, the pool was subject to a number of improvements, which included additional seating for audiences, who enjoyed the many competitions and aquatic displays hosted at the venue, better changing facilities and new fountains for children. 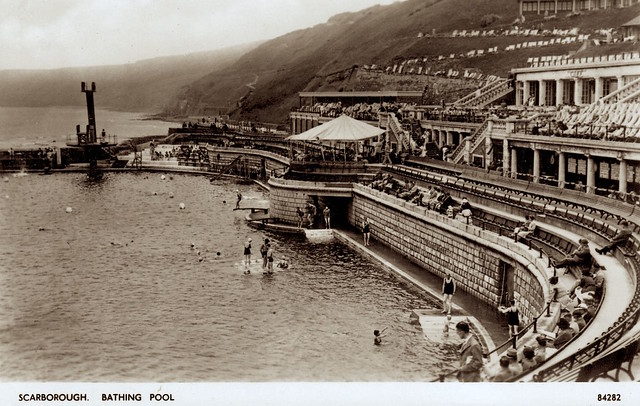 Above: The pool provided substantial seating areas for visitors (source)

There are several videos online that offer tantalising glimpses of the pool at various stages in its history – some examples are included below:

Visitors to the Stories From Scarborough Facebook Page have shared some lovely memories of the pool.

Ah, many a day was spent during the summer hols in this pool. Who remembers being able to take inflatable’s into the pool; the Victorian changing rooms and the mangle to wring out your cossie?

I spent wonderful summers here, swimming all day and chatting with friends, leaning over the outer wall at high tide and watching enormous eels swim by…

Picture this, a foggy morning, the fog horn monotonous ghostly call and a crocodile fashion of school boys winding their way down the ‘south cliff’, the pool down in the distance, looking about as welcoming as the North Sea itself……The lighter green area is where we had to do 2 lengths in order to satisfy the teachers that all new boys could swim. So long ago, but the memory of chattering teeth and hyperventilation during the test (mid May 1969) and over active imagination….and this is before Peter Benchley’s Jaws!!… This picture is a fine example of how people wanted it to be like, but in reality…shhhhivvvvver!

I did the top board ! I remember sitting on the edge and slipping off ! I remember it was so cold ! My mother took me to the open pool every day in our summer holidays ! I also remember they may of had a small board around the pool apart from the main three !! Happy days I was only a very young man !

Check out the album for this attraction on the Stories From Scarborough Facebook Page for more memories and comments – there were too many brilliant ones to include them all here. 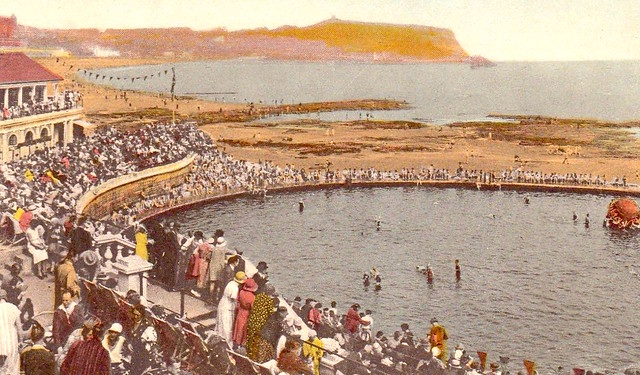 Above: The pool in its heyday (source)

The pool closed in 1989 – the diving boards were taken down, although the fountains remained and the facilities slowly fell into dereliction and decay. Attempts were made to save it from being filled in – the Twentieth Century Society, for instance, put forward some strong arguments for its historical value, but in the early 2000s it was redeveloped, and all traces of the pool, except for its distinctive outline, have since disappeared.

3 thoughts on “The Story of the South Bay Pool”